“You’ve got to celebrate those moments where you are just on the floor rolling around in hysterics.”
ByNehal Aggarwal
Associate Editor
PublishedApr 2020 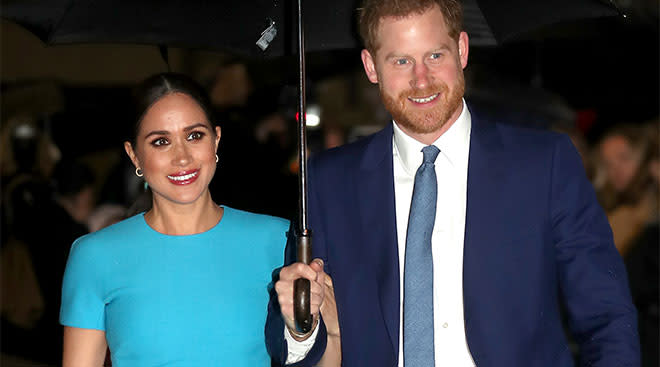 Prince Harry is trying to enjoy the unexpected time he’s getting to spend with 11-month-old Archie and Meghan Markle during quarantine. Recently, he opened up about his lockdown experience during a 30-minute video call.

While discussing the experience of vulnerable families in the UK and the need for more help from the British government to organizations like WellChild, Harry also opened up about what it’s like having so much time with family.

“There’s a hell of a lot of positives that are happening at the same time and being able to have family time—so much family time—that you almost think, ‘Do I feel guilty for having so much family time?’" Harry said during the call. “You’ve got to celebrate those moments where you are just on the floor rolling around in hysterics…Inevitably, half an hour later, maybe a day later, there’s going to be something that you have to deal with, and there’s no way you can run away from it.”

He continued, “I think it’s certainly strange times—everyone is experiencing the same thing in a very unique way. But the longer this goes on for, I imagine the harder it is for each and every one of you…It’s all about morale. If morale is up, if you wake up in the morning and go, ‘Right, new day, got my whole family here, what are we going to do?’ Of course, there’s that fear of what might happen, but there’s so much that’s out of our control, and all of the sudden we’ve realized how small we are in the grand scheme of things."

While Harry and Meghan stepped back from their roles as senior members of the British royal family on March 31, they’re finding other ways to get involved and help. Along with sharing their plans to launch a new nonprofit, named Archewell, they have been sharing messages of hope to people across the globe. The former royal couple has also announced plans to donate $112,000 in profits from the BBC broadcast of their wedding to Feeding Britain.

"It is really nice to see you all smiling and happy,’’ Harry said as he ended the call. “Keep going, keep the morale up, keep busy, keep being creative, dare yourself to try new hobbies, and I hope to see you all again very, very soon!”