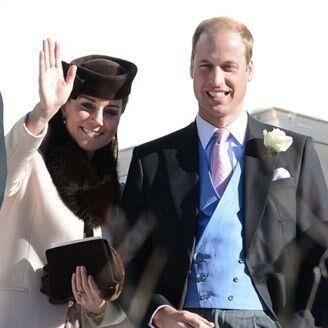 How’s this for a shocker: no one in England can keep a secret! Word on ole Trafalgar Square is that pregnant Kate Middleton and Prince William have deci** ded a very regal, royal baby name!**

Goodie, guys, because I was starting to believe that people in the royal inner circle were not going to let this one slip. Luckily, people are predictable and the details are out!

So, what are the Duchess of Cambridge and her doting daddy-to-be planning on naming their little girl? Aside from the fact that they’re supposedly calling the baby-to-be " Our Little Grape" (fun fact: chances are Will and Kate got the inspiration from the size of their baby in utero!) — they’re reportedly settled on a much more appropriate name for baby.

According to Lainey Gossip, the duo has chosen Elizabeth Diana Carole , which is a very beautiful nod to William’s grandmother, the Queen, Will’s late mother, Diana and Kate’s mom, Carole. Since the royal baby will be the future ruler of England, the name follows a very long lineage of English queens named ‘Elizabeth.’ Though the future King and Queen have not officially released details on baby’s name, we can only guess that this is correct — but from the looks of it, it looks pretty on point to us!

Personally, I think it’s the perfect combination of tradition, family and modernity — a full circle crowd pleasure! It’s sweet enough for a baby girl but strong enough to carry a future Queen. Thumbs up, royal couple! The Bump approves!

What do you think of their reported name pick?

These Are the Most Popular Baby Names of the Decade

Best Baby Names Based on Your Child’s Zodiac Sign

The Baby Name Choice That May End This Couple's Marriage

What Makes a Name ‘Gender Neutral’? the Answer Might Surprise You