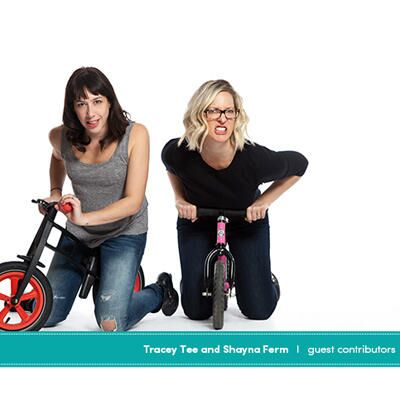 Meet Shayna Ferm and Tracey Tee, the ladies behind The Pump and Dump Validation Tour. These Denver-based moms are here to remind you that even on your worst parenting day, you're doing a great job. And whether it's via song at their parentally-incorrect live comedy shows or via blog post on The Bump, they're guaranteed to make you laugh. If you're in L.A. treat yourself to a parents' night out and catch them at Largo on Feb. 4. There will be funny songs, lots of prizes, and oh yeah, wine! (You can buy tickets here.) In their latest exclusive post for us, Shayna shares her thoughts on managing motherhood and comedy.

A bunch of lists made their way around Facebook as 2014 came to a close: Trending Stories, Sneakiest Pets, Fanciest Pillows, Spiciest Hams, Best Smelling Celebrities…you get it.  Then I came across comedian/writer Sara Schaefer’s list that she made off the top of her head–in 30 minutes–of every female comedian she could think of to make the awesome point that bookers at comedy clubs should never complain that there just aren’t enough funny women to give jobs to.  It’s an EXCELLENT point and I believe she was able to name 160 women comics. I wasn’t on this list and it made me realize for the first time, I’m off the grid.

I was a performer/comedian in New York City for 12 years. Three years ago, I moved to Denver, Colo., to have a second kid, get a house, drive a car, afford a dog; I wanted to see what was next for me outside of N.Y.C.  Then I started producing a show that has ended up becoming “The Pump and Dump.” It has been running for over two years, travels around the country and has become my job.

I recently saw the documentary " Why We Laugh: Funny Women," which discusses how difficult it is to be both a mom and a comedian and the reasons that many women choose comedy over family–a totally respectable decision. Comedy is tough. There’s no stability. You’re always working (on and off-stage). There’s a lot of rejection. The hours are hard. The opportunities are scarce. So imagine dealing with all that and also being responsible for wiping butts, rubbing cheeks, sick kids, a household, the relationships/marriage involved and simple things like providing food to keep them alive. Plus, there’s the unfortunate stigma once you’ve been a comic and then become a mom: Is she only going to talk about her kids now? Will she still be as committed to her career? Can she go on the road and be a mother to her children? Is she still “f-ck-able”? Is she still funny? Not fair, but true.

I don’t play out three to four times a week anymore.  I don’t audition for pilots or submit jokes to talk shows anymore.  I’m not writing a web series or taking any more “meetings.”  I don’t want a manager.  I’m raising two small humans, trying to find time to have sex with my husband and working full-time as a comedian/producer in Denver, Colo.  Of course I am not on the list of comics on the top of Sara’s brain, but I am still a woman comic in year 15 of my career.  So I started asking myself: How many of the women on that list are moms too?  How many women comics are moms and are still doing all those things I listed above and have stayed on the grid?  How many are off the grid like me, but still making it work? Let’s make a list of all of them!

So here’s the start of a new list for 2015. It’s a list of Awesome Moms who are right this very moment rocking it in comedy and as a parent.  It’s a work in progress because I KNOW that there are more moms out there that I didn’t think of while writing this (if you saw my living room right now and the two- and four-year-olds up my butt, you’d understand). And I know that there are also those moms who’ve chosen to take themselves off the grid and find balance and success in their own way.  Please take a look, check out some of these funny #breeders, and comment with more names to add because we should totally celebrate hard-working moms in comedy every chance we get, especially on The Bump.

The Pump and Dump Work-in-Progress List of Awesome Moms in Comedy:

(As if being a comedian weren’t hard enough)