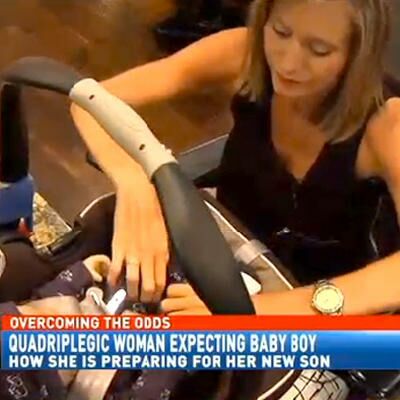 Jen Goodwin knows a thing or two about taking initiative.

The Arkansas native, a 32-year-old quadriplegic, just finished her second year of law school. She’s getting ready to take on another endeavor, parenthood. And she’s doing it alone.

Since a boating accident left her paralyzed from the neck down seven years ago, Goodwin’s come a long way. She’s regained some motion in her arms. She’s dated. She’s been in relationships. But when it came to starting a family, no one wanted anything serious.

“I got to be 32 and still single and I’m like – okay – now what am I going to do?” Goodwin tells local news station KATV.

Although Goodwin lives a very independent life in a house designed specifically for her needs, adoption agencies were reluctant to place a child in her care. And unlike the “paralyzed bride” Rachelle Friedman, she didn’t use a surrogate. With the blessing of her OB, Goodwin started a family on her own terms, getting pregnant through artificial insemination.

She’s spent the last few months preparing for the arrival of her baby boy, whom she’s already named Beckham, later this summer. The physical therapy program at the University of Central Arkansas has helped her learn how to hold and maneuver a baby. She’s practiced carrying and installing a car seat in her handicapped vehicle. And she’s converting her outdoor patio into a nursery.

Goodwin adds that she’ll ask for help if she needs it, noting that a nanny might be necessary down the road. Plus, her parents happen to be her neighbors.

“Having his Gigi and Poppy living next door will be a huge asset,” she says.

For all those who’ve expressed criticism of Goodwin’s decision, she has this message:

“I just challenge them that if they can live my life better than I do – more power to them.”