“The biggest trend I see in names for rainbow babies are names with positive and uplifting meanings.”
save article 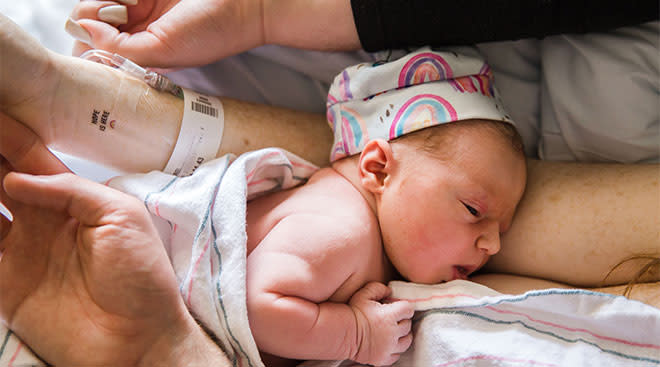 Carrying a rainbow baby can be a wonderful and beautiful experience—but it can also be an emotional and scary one. So, it makes sense that parents spend some time looking for just the right name for their rainbow baby. According to Pamela Redmond, the co-creator of popular baby naming site Nameberry, these are some of the most popular names for rainbow babies.

“The biggest trend I see in names for rainbow babies are names with positive and uplifting meanings,” Redmond told TODAY Parents. “Going through a pregnancy after a stillbirth or miscarriage can be frightening and traumatic as well as exciting. Some parents don’t really exhale or finalize a name choice until the baby is born.”

She adds that many parents who welcome rainbow babies strive to find a name that’s personal, emotional or spiritual in its meaning. “With the birth of a child, parents want to focus on the positive force of new life. They may always mourn for the baby they lost, but the right name helps them celebrate the new child as a fresh individual while still commemorating their unique place in the family,” she explained.

Redmond added that, while parents may not use the name of an older sibling who passed away, they may still commemorate it in some way. “Possibly by using it as a middle name or using the same first initial or finding a name that is connected through meaning or other subtle factor—two Biblical names, say,” she told the outlet.

Some popular names for rainbow babies include:

Rainbow babies are named so because they bring parents hope of what’s to come. It’s a sad truth that pregnancy loss is more common than one may think. In the United States, up to 25 percent of pregnancies end in miscarriage and 1 in 100 pregnancies will be affected by stillbirth. If you or anyone you know is currently carrying a rainbow baby, check out some of these inspiring rainbow pregnancy stories.