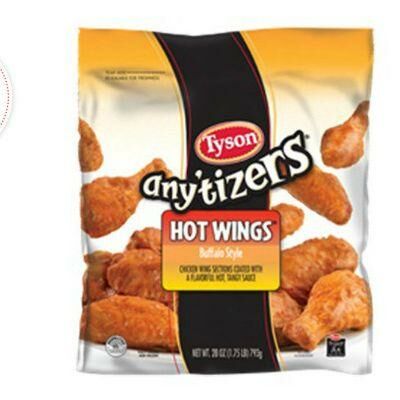 Tyson chicken lovers might have to start looking elsewhere for their daily dose of protein. Today, the U.S. Department of Agriculture’s Food Safety and Inspection Service (FSIS) announced that Tyson Foods Inc. has recalled approximately 52,486 pounds of chicken wing product that had an “off-odor” scent — which could have resulted from possible contamination. The affected products, which were distributed to retailers nationwide, include select packages of Tyson Any’tizers Fully Cooked Hot Wings  with buy/sell by dates of October 24, 2016 and October 25, 2016.

Though an unspecified number of people have reported “mild illness” after eating the product, there have not yet been any reports serious illness or hospitalization following product consumption. Those who have purchased the product are being urged to dispose of them or return them to retailers.

Last January, Tyson announced another major recall on 75,000 bags of chicken nuggets. While there are bound to be a number of concerned parents concerned by Tyson’s latest recall, pregnant women should also be on high alert. The dangers of consuming contaminated poultry during pregnancy are especially harmful. The associated risks of salmonella or listeriosis can lead to worst-case scenarios of miscarriage, premature delivery, newborn infection and stillbirth. And even the less-scary vomiting and nausea linked to food poisoning causes dehydration.

Want to make sure you don’t have any recalled food or baby gear at home? Double check the  latest baby product recalls.