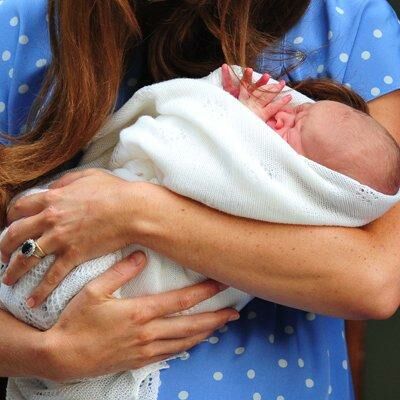 Baby Cambridge finally has a name! Two days after being welcomed to the world, proud new parents Prince William and Kate Middleton have settled on a name for the future heir to the British throne! While the wait has felt like an eternity, lets be thankful Wills and Kate didn’t keep us hanging in suspense for a month (like Queen Elizabeth and Prince Phillip did before choosing a name for Prince Charles ) or a week (like Princess Diana and Prince Charles did before settling on a name for their first-born, Prince William ).

Survey says it’s a TOTAL YES! I love that they’ve chosen a name that’s traditional, modern, fit for a king but totally adorable for a little boy. Also, just because his name is George doesn’t mean he’ll actually have to go by it. He can go by Alex or Louie — so it looks like he’ll have some room to decide what he wants to go by. After all, Prince Harry’s given name is Prince Henry and he gets by just fine going by Harry.

The announcement came in the form of a press release, given via Kensington Palace.

Are you surprised by the name they’ve chosen? Love it or hate it?