“We imagine it will be like two moms and two dads all raising our families together.”
save article 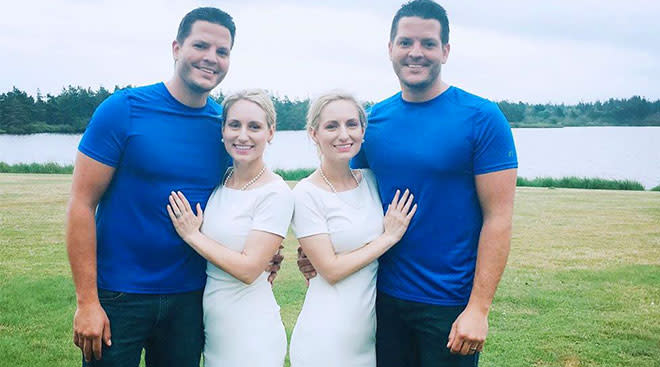 The announcement came through the couples’ Instagram post on August 14. “Guess what!!?? BOTH couples are pregnant!” the Salyers twins wrote in the caption. “We are thrilled and grateful to experience overlapping pregnancies and to share this news with you all!”

While legally their children will be cousins, since twins share the same DNA, they will likely be genetically more similar to siblings. “Our children will not only be cousins, but full genetic siblings and quaternary multiples!” they continued in the caption. “Can’t wait to meet them and for them to meet each other!”

The couples rose to prominence after appearing on TLC’s “Our Twinsane Wedding.” They married in a joint ceremony in Twinsburg, Ohio at the 2018 Twins Day Festival, where the sisters had met their respective husbands the year before.

As unlikely as the chances of twins married to twins getting pregnant at the same time may sound, according to an 2018 interview with People, the sisters knew it would happen for them.

“When we have children, my and Josh’s children will be genetic siblings to Briana and Jeremy’s children,” Brittany told the outlet. “Even though they’re cousins, they’re technically genetic siblings. We imagine it will be like two moms and two dads all raising our families together.”