“Just the fact that we were able to get pregnant was such a blessing because with PCOS that made me nervous.”
Save article
ByNehal Aggarwal
Associate Editor
PublishedJul 2020 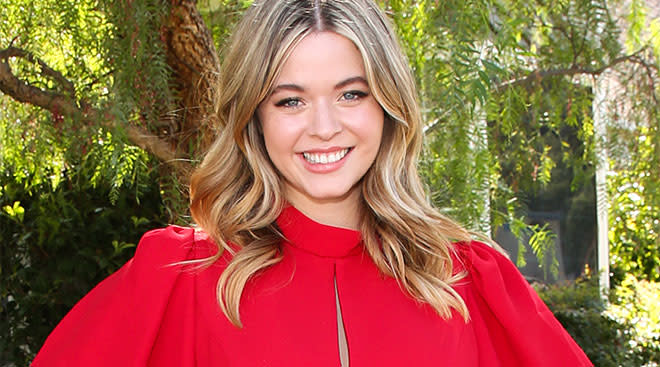 Actress Sasha Pieterse and husband Hudson Sheaffer are currently expecting their first child. The couple announced the pregnancy back in May. While they are enjoying every moment of the journey together, the Pretty Little Liars star recently opened up about the impact polycystic ovarian syndrome (PCOS) has had on her pregnancy journey so far.

PCOS is a common hormone condition that affects women in several ways, including their ability to conceive. “Just the fact that we were able to get pregnant was such a blessing because with PCOS that made me nervous,” she told People in an interview. "A lot of women have infertility issues and so we were expecting more difficulty, so it’s been an absolute blessing that we were able to just get pregnant by ourselves.”

Pieterse, 24, continued that her pregnancy has actually helped balance out her hormones, and she’s hopeful this may help her PCOS in the future, as well. “I’ve heard some really amazing stories about how pregnancy can actually help with symptoms of PCOS afterward, which would be amazing, but we’re taking it one step at a time and just thankful that we’re both healthy,” she told the outlet.

While being pregnant during a pandemic can be next-level stressful, Pieterse continued that she’s viewing it as a “blessing in disguise” and savoring each moment with her husband at home.

“I just want to see this little face. I think that the more the baby moves and changes you, you just want to meet them and see the person that they’re gonna be. I’m excited for all those little things, but also just for this new chapter and this new journey,” she continued. ‘I wanted to be a mom my whole life. The fact that it’s finally here—it’s a crazy, crazy time, but a beautiful time. In the midst of everything happening, it really is the silver lining for us.”

“It’s not an easy road, but being able to focus on getting myself healthy again and the fact that I’m seeing results now and getting better is all I can ask for,” she said on the show. “What I want [is] for people to have awareness because so many women have it and they don’t know and if you don’t catch it in time, it leads to [things like] ovarian cancer and breast cancer and all kinds of things that women deal with all the time. [A lot of it] could’ve been avoided, so if I can share that, that’s really important to me."