In case you needed a reason to wash your hands more often.
Save article
ByNehal Aggarwal
Associate Editor
PublishedDec 2019 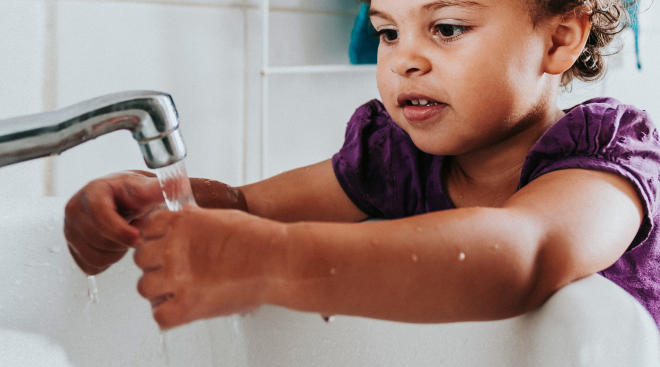 As we enter the cold and flu season, it’s important to brush up on how to stay healthy. Experts have long touted washing your hands as the most recommended way to fight against germs. Now, one teacher’s science project proves the effectiveness of their advice—and it’s going viral.

On December 5, elementary school teacher Jaralee Annice Metcalf shared the experiment to her Facebook page. “We did a science project in class this last month as flu season was starting. We took fresh bread and touched it. We did one slice untouched. One with unwashed hands. One with hand sanitizer. One with washed hands with warm water and soap. Then we decided to rub a piece on all our classroom Chromebooks.” (She later clarified that the students’ Chromebooks are typically sanitized everyday, but were not that day due to the experiment.”

She goes on to describe what they found as “disgusting” and explains that all the students touched each piece of the plain white bread (but only the ones that were meant to be touched). She then put each slice of bread in a freezer ziplock bag (the kind meant for raw meat) and sealed them tight. The results took three to four weeks to manifest due to the preservatives in the bread.

The results speak for themselves. In the picture Metcalf posted, viewers can see that the fresh and untouched, “control” bread remained largely the same. The piece that was touched with unwashed hands developed a lot yellow and green mold (so gross!). The piece that was touched with hands cleaned by hand sanitizer also developed the mold but in a smaller quantity. Even more disgusting, the piece of bread that was rubbed on the Chromebooks almost all developed some kind of greenish black mold. The piece that remained seemingly unharmed, similar to the control, was the one touch by hands cleaned with soap and water.

People are alarmed at the findings. One person commented on the post, “Good to know. Can and will share about hand sanitizer again Wow !” while another tagged friends and wrote, “Check this out! So gross. I bet less than 10% of our students have ever sanitized their chromebooks.”

Of course, it’s important to keep in mind, as Metcalf mentions, this is a simple elementary school experiment and may not be a perfect example of the science behind the importance of washing your hands. But, even so, with the CDC estimating at least 2.6 million flu illnesses so far this season, it doesn’t hurt to wash your hands (and teach your kids to do the same) a little more often.