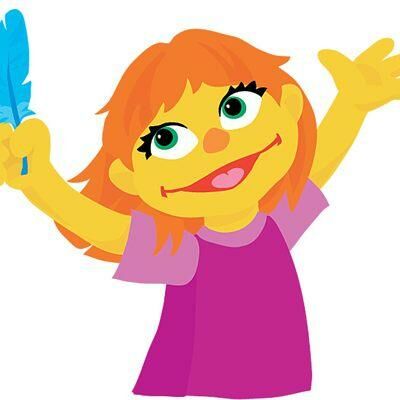 Julia, described as “a preschool girl with autism who does things a little differently when playing with her friends,” moved on the block to “help increase understanding, reduce stigma, and demonstrate the commonalities that children with Autism share with all children.” Her arrival comes nearly 18 months after Sesame Workshop announced a partnership with Autism Speaks, an organization focused on children with autism.

The wide-eyed girl with a big smile is one of the prominent characters in the nonprofit’s new digital initiative Sesame Street and Autism: See Amazing in All Children, which is targeted to toddlers and kids ages 2 to 5. The accompanying iPad app and online resources—including stories, songs and advice—aim to help both parents and children with autism as well as those who aren’t directly affected.

“She has some behaviors like not looking at you directly in the eye, she’s a little more sensitive to noises and lights but when she comes together with Abby and Elmo, she shares not only these challenges but also what she shares in common,” Dr. Jeanette Betancourt, the senior vice president of U.S. social impact at Sesame Workshop, tells ABC News.

One in 68 children in the U.S. are diagnosed with autism spectrum disorder (ASD), although typically not until age 4 or 5. Since boys are nearly five times more likely than girls to have autism, it’s a little surprising that Sesame Workshop chose to make a character with autism a girl.

However, the initiative offers resources that aim to highlight the commonalties among children instead of their differences and create a better educational and social environment for all since autistic children are five times more likely to get bullied, Dr. Betancourt tells  PEOPLE. A recent study found that kids who watch Sesame Street are 14 percent less likely to be behind in school, so by Sesame Street deciding to raise awareness for autism by helping parents and children understand and accept those who are on the spectrum, everyone wins.

Check out the initiative here and find out more by following the #SeeAmazing hashtag on social media.