“If we can give them love and care and support, then we can try and stave off some of the damage that they are suffering.”
Save article
ByNehal Aggarwal
Associate Editor
PublishedNov 2019 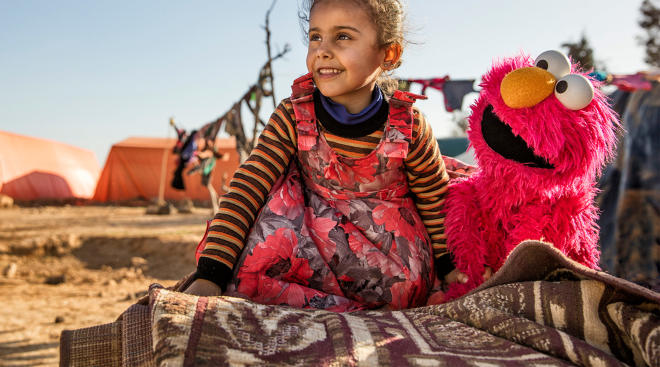 When we think of Sesame Street, we think of a fun and educational show that helps teach young minds everything from the letters of the alphabet to how to embrace someone who may be different from you. Now, Sesame Workshop, the nonprofit behind the show, is teaming up with the International Rescue Committee (IRC), an organization that provides assistance to refugees, to bring the show to refugee children.

According to a recent episode of 60 minutes on CBS News, the initiative, which won $100 million grant from the MacArthur Foundation, will attempt to address the need for educational resources in refugee camps. Not only will there be a new show, but the grant money will also be used to deliver in-person services to over one million refugee kids.

“Our partnership with Sesame Street will help transform children’s lives by making sure that their social-emotional needs are met so they are able to receive an education, contribute to their community and succeed as adults,” David Miliband, president and CEO of the IRC said in a release.

While the show will teach children in refugee camps their letters and numbers, the focus will be on helping the kids navigate emotions from any trauma they may have already faced, such as fear, anger, loneliness, sadness and more.

The main characters include two Muppets named Basma and Jad. While the show never explicitly says Jad is a refugee, CBS News reports, it provides clues. Not only is he voiced by a Syrian actor, but in one episode where the kids show each other their toys, Jad says he doesn’t have any because he had to leave all his toys at his old home.

The show, which will be called Ahlan Simsi (meaning Welcome Sesame in Arabic) is already in production in Jordan, a country that is now home to many Syrian refugees. The show will be available to over eight million children living in refugee camps.

“A dose of normality—that’s what children are robbed of,” Miliband stated in the release. “In the middle of war and persecution, they see unspeakable violence. The danger is that violence becomes the normality. If we can give them love and care and support, then we can try and stave off some of the damage that they are suffering.”

In the present, more people live as refugees than at any other time since World War II, CBS News reports, and approximately half of those refugees are kids. As conflicts sometimes go on for years, many of these children are spending their childhood as refugees. According to the IRC, five million Syrian children’s lives are “marked by conflict and chaos” and “one in 10 of all registered Syrian refugees are under the age of 5.”

The grant is expected to last for five years. While the initiative is currently focused on refugee children in Syria, Jordan, Lebanon and Iraq, the hope is it will eventually expand to include more areas worldwide, such as Bangladesh and Uganda.