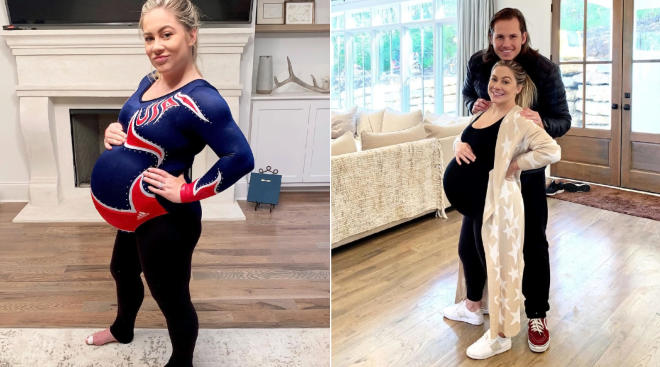 Olympic gold medalist Shawn Johnson and her husband Andrew East announced the arrival of their baby girl in the sweetest Instagram post yesterday.

In the caption Johnson wrote, “You are our everything. Welcome to the world baby girl.” Johnson, whose original due date was October 23, gave birth at 41 weeks. In a prior Instagram post, Johnson voiced her impatience, writing in the caption, “I think baby is getting a little too comfortable in there…the East baby, WE ARE READY TO MEET YOU!”

Johnson and East have kept a log of their pregnancy journey their Youtube channel. Last week, in a live-stream video titled, “past due,” the pair looked back on their pregnancy and the complications they faced early on.

“The doctors are in disbelief because with all the complications our pregnancy had, the concern was that the baby wasn’t going to grow,” East said, with Johnson adding, “Our doctor said, ‘Normally you see small babies with a two-vessel cord, but that’s not the case for you.’”

Back in July, the couple announced on their Youtube channel that they had learned of pregnancy complications during their 20-week ultrasound. The imaging showed dilated kidneys that were retaining fluids and a two-vessel umbilical cord, which only occurs in 1 percent of pregnancies. Their doctor warned them this could mean increased risks of stillbirth and delivery complications, as well as indicate a possibility of baby being born with Down syndrome.

Despite the news, the couple continue to maintain a positive outlook and could not be more excited to be parents—but they emphasized that their priority will continue to lie with each other, even after baby. “It’s been great just being the two of us, but you know what you’re always my priority. We are firm believers that when it comes to raising a kid—and again we’ve never raised a kid before—but we think the best way to raise a kid is to make sure that our relationship comes first as husband and wife,” Johnson said in the video. “The stronger our relationship is the better we’ll be able to raise a kid.”

One thing is for sure, Johnson and East have a rock solid relationship. East stated in the video that he recognized this pregnancy was emotionally challenging at times and he was proud of the way Johnson had handled it. “I feel like a lot of [women] struggle with body image, especially gymnasts and ex-athletes,” East said in the video. “I feel like that consumed a decent part of your mental capacity, [just] thinking about those insecurities. Since you’ve been pregnant you’ve been free from that. You’ve been more you and and the woman that you are, and I’m very proud of you.”

Fans of the couple couldn’t be more excited, as one person wrote, “So many congratulations!! She is absolutely beautiful and perfect!!! Enjoy this new journey in life, it is the best one!!!” while another commented, “​I’m so happy for you guys, you’ve both come so far on this journey, I have been watching from the beginning, and I’m so thankful that you have shared your journey with us. I’m soo soo soo happy for you.”