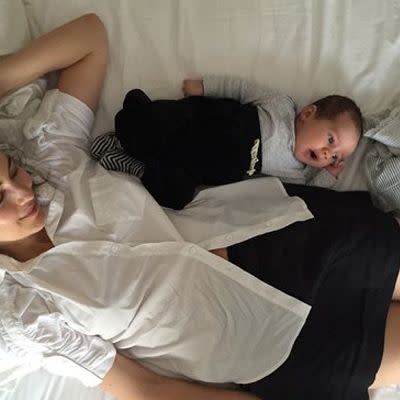 Fair warning: This weekend’s “Motherlode” post from The New York Times is one you’re probably not going to want to read, but it’s one that you should. Amber Scorah details how on her very first day back to work, her 3-month-old son, Karl, died at day care. It’s a painful read, but poses an important question. If the best caregiver for baby is you, why doesn’t our culture make that option realistic?

“This article isn’t about day-care safety. This isn’t an indictment of the company I work for; I had one of the better parental leave policies of anyone I know,” Scorah clarifies. “What this article is about is that my infant died in the care of a stranger, when he should have been with me. Our culture demanded it.”

Scorah lays out her situation. Working for a New York City publishing company, she felt lucky to have three months of paid leave. But she didn’t feel it was quite enough for her family.

“Even with three months under our belts and Karl’s neck strong enough to hold himself up, I was uncomfortable with the idea of leaving him,” she writes. “I wanted to be his caregiver longer, until he was a bit bigger. I could see how our time together in this early infancy was of so much value, how being with me every day made him more and more comfortable navigating his new environment. I noticed how he looked to me to learn things and make sense of his world. I could tell how safe and secure he felt. Though it was a hard and tiring time, every minute with Karl felt like an investment in his current and future well-being. Not to mention I was hopelessly tickled with him.”

So she asked her company for an unpaid extension. But they were unable to facilitate her request; the only option was to quit.

“I contemplated it. By the time I paid for child care in New York City, I was barely making much take-home pay anyway.” she writes. “But what compounded the financial concern was that if I quit, I would lose our health insurance. Lee, my partner, works freelance and Karl was covered under my work insurance.”

The family couldn’t sacrifice Lee’s wages, which were higher than Scorah’s. They succumbed to day care, finding a facility that, all things considered, seemed perfect.

“After a long search, many waiting lists, interviews and a great deal of angst, we settled on a day care near my workplace,” Scorah says. “With this day care, I could still go over at lunch and breastfeed Karl, and have a visit with him, so we would never be apart more than a few hours. And the day care was recommended by many moms I knew who had similar circumstances to mine. It felt like a loving, safe space for Karl.”

On day one, the couple was greeted with a reassuring joke from the day care owner. All was well. Or as well as it could be.

“I returned to the day care at 12:15 to nurse Karl. I was so excited to see him, I ran the two blocks there from the office,” Scorah says. “As I took the stairs by twos to the second floor, I noticed that the door to the day care was propped open. It seemed odd to me — that they would leave the door open, with so many toddlers inside. I walked around the corner, expecting to pick up my son, feel his chubby rolls, see his face light up at the sight of his mommy. Instead, I saw my son unconscious, splayed out on a soft changing table. His lips and the area around his mouth were blue, and the day-care owner was performing CPR on him, incorrectly.”

A mere two and a half hours after Scorah left he son for the first time, he died.

It’s a combination of a bad dream and bad luck. Sudden unexplained infant death can happen at any time. Can anyone be deemed responsible?

“Yes, it’s possible that even in a different system, Karl still might not have lived a day longer, but had he had been with me, where I wanted him, I wouldn’t be sitting here, living with the nearly incapacitating anguish of a question that has no answer,” writes Scorah, wondering whether Karl would have lived had he been in her care.

“A mother should never have no choice but to leave her infant with a stranger at 3 months old if that decision doesn’t feel right to her. Or at 6 weeks old. Or 3 weeks old. I would have stayed home with Karl longer, but there just didn’t seem to be a way,” she says. “And I knew well enough that a million other mothers in America before me had faced the same choice and had done the same, even earlier than I had, though it tortured them emotionally, or physically, to do so.”

She asks the same question we do over and over: “Why, why does a parent in this country have to sacrifice her job, her ability to provide her child with proper health care —- or for many worse off than me, enough food to eat — to buy just a few more months to nurture a child past the point of vulnerability?”

We’ve made our case for better parental leave. And Scorah drives it home. Visit  www.forkarl.com to contact your government representatives — presidential candidates — to voice your opinion on family leave.