It may seem like your kid has ADHD, but there may be a lot more to it than that.
Save article
ByStephanie Grassullo
Associate Editor
PublishedFeb 2019 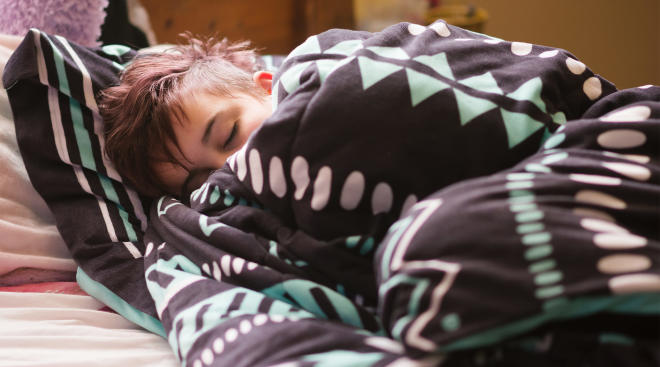 While up to 15 percent of kids have sleep disordered breathing (SDB), including obstructive sleep apnea (OSA), 90 percent go undiagnosed, according to research in the Journal of the American Osteopathic Association. The symptoms are often misattributed to psychological or emotional issues.

“Children who have behavior problems or are suspected to have ADHD might actually be suffering from a chronic lack of restorative sleep,” John White, DDS, coauthor on the study, says.

Neurocognitive development, cellular regeneration and tissue and bone growth all occur during the deep sleep stage. When breathing is obstructed in the upper airway, the brain switches back from deep to light sleep in order to resume normal breathing. But, researchers explain, this prevents the mind and body from important restorative processes.

Your kid may have SDB or OSA if they show some of the following symptoms: snoring, restless sleep, excessive sleepiness, teeth grinding and jaw clenching, migraines, bedwetting and irritability. If any of these symptoms sound familiar, researchers suggest visiting a pediatric ENT, sleep specialist, dentist or myofunctional therapist.

Infants with tongue-tie or who have latching problems during breastfeeding might be at risk for developing SDB or OSA, as well as children who have speech delays, White says.

“Once we identify sleep apnea, treatment is usually very effective. The challenge is catching it early enough,” White explains. “The early years are critical for brain development, so it’s essential that this condition is on our radar.”

Mom Melody Yazdani went viral when she shared a “red flag” picture of her son on Facebook to warn parents about “mouth breathing” during sleep. After years of struggling with her son’s behavior at school and multiple tests for ADHD, one trip to the dentist triggered a wealth of information on the boy’s issues. Her son was soon diagnosed with sleep apnea, and receiving the proper treatment has made all the difference for the family.

“We have seen a complete 180 in behavior. No more angry tantrums, no more fixation on little OCD things—it has been an enormous change,” she happily shares. “No behavior reports in school; his appetite has exploded; he’s no longer a picky eater; and he had a huge growth spurt two weeks after the surgery.”

The study’s authors hope their research will raise awareness on the topic, ultimately leading to proper diagnoses of sleep disordered breathing in kids.