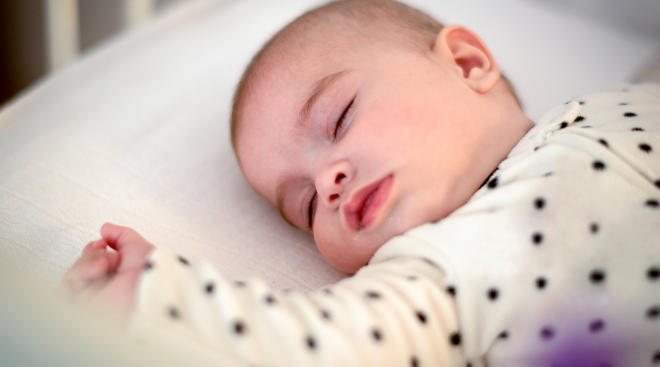 Even though most babies don’t start talking until the one year mark or later, you probably already know you’re encouraged to talk to them all the time for better language development. But if you need a break from all that babbling, we have some good news: sleep is equally as important for word recognition.

Researchers from the Max Planck Institute for Human Cognitive and Brain Sciences found that babies can associate a word with its meaning from 6 or 8 months old—much earlier than previously thought. There’s one stipulation, though: Those babies need to take a nap in order to do so.

Here’s how the 2017 study went down. To make sure infants weren’t tapping into any existing knowledge, researchers introduced them to unrecognizable objects with fake names, like ‘bofel.’ To make things more complicated, researchers showed them different kinds of bofels, differentiated slightly, like by color. The goal here was to see how advanced baby’s word association could be. A real-life example? This would be like introducing babies to a cat and then showing them a different breed to see if they could still associate it with the word ‘cat.’

At first, it didn’t go so well. Brain reactions showed every object/word pair came off as unknown and unique to baby, even when it was just a different colored bofel.

Then the babies took naps.

Babies who fell asleep after being taught the objects and their names could later differentiate between the right and wrong term for a new object. Babies who stated awake couldn’t.

What’s going on here? After about 30 minutes of sleep, babies showed a brain reaction similar to the one that occurs when you associate a sound with an image. And after about 50 minutes of sleep, they showed a brain reaction typically reserved for older kids and adults, showing that incongruous meanings (in this case, a word and an object) were processed in the brain.

"Our results demonstrate that children hold real word meanings in their long-term memory much earlier than assumed,” senior study author Angela D. Friederici says. “Although the brain structures relevant for this type of memory are not fully matured, they can already be used to a distinguishable extent.”

Essentially, sleep plays an important role in memory. But as a sleep-deprived parent, you probably knew that.

When Do Babies Say Mama and Dada?