While there are many unknowns when it comes to marijuana use during pregnancy, a new study raises some red flags.
Save article
ByStephanie Grassullo
Associate Editor
PublishedApr 2019 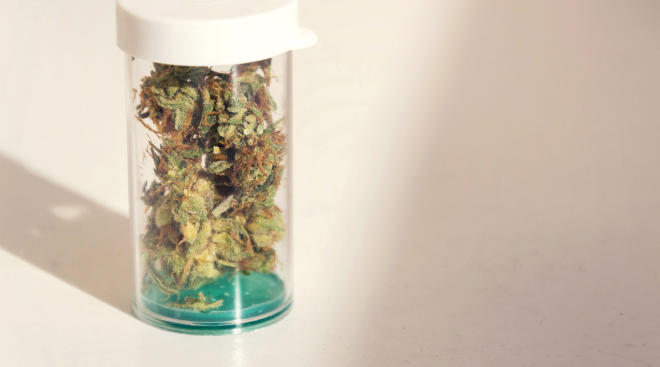 While smoking pot during pregnancy is a rising trend for expectant moms, a new study published in JAMA Psychiatry is raising some red flags. Researchers say using marijuana during pregnancy could put baby at a slightly increased risk of developing psychosis later in life.

The study comes as the number of women who say they use marijuana during their pregnancy has nearly doubled in the last decade, according to research. Data from the U.S. National Survey of Drug Use revealed the number of women smoking pot during pregnancy has risen from 2.85 percent to nearly 5 percent between 2002 and 2016. And of the 12,000 women surveyed, nearly 3,500 said they used marijuana during their first trimester of pregnancy—a critical time for baby’s development.

The latest study used data from the initial Adolescent Brain Cognitive Development (ABCD) study, an ongoing longitudinal study of child health and brain development with data collection sites throughout the nation. The team reviewed survey responses from 3,774 mothers about marijuana usage during 3,926 pregnancies. They also analyzed the risk of psychosis in 4,361 children born between 2005 and 2008, who completed a questionnaire when they were between the ages of 8.9 and 11 years old. The results suggest smoking pot during pregnancy lead to a small increase in the development of psychosis.

While researchers point out the study is observational, and can’t prove a cause and effect, the link between the two was made “after accounting for potentially confounding variables—such as maternal education, prenatal vitamin usage, prenatal alcohol and nicotine use, child substance use, and so on—increases the plausibility that prenatal cannabis exposure may contribute to a small risk of increased psychosis liability in children," says senior author Ryan Bogdan.

The researchers aren’t alone in their advice for mothers to tread with caution when it comes to marijuana use during pregnancy. The Centers for Disease Control and Prevention previously warned expecting moms against smoking marijuana, explaining the active chemical in the drug can harm baby’s development. Additionally, the American Academy of Pediatrics recommends women steer clear of marijuana altogether while pregnant or nursing.