Snooki: Life Is Totally Different as a Mom Of Two 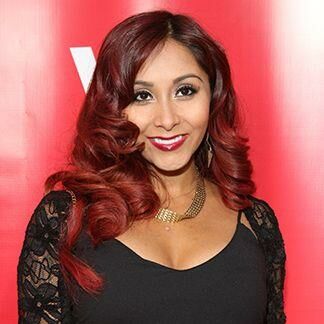 We couldn’t wait to hear Snooki weigh in on the final season of Snooki & _JWoww _and being a new mom again. But first thing’s first: maybe we should stop calling her Snooki.

“Snooki was my party girl image before I had kids and being a mom — I really don’t think Snooki exists anymore,” she tells PEOPLE Now.

So let’s stat over. Nicole Polizzi — mom to Lorenzo, 2, and Giovanna, 1 month — has definitely calmed down since her Jersey Shore days. And while she’s not ready to be done with TV altogether, she is happy to take a break from the reality spotlight after this season of Snooki & JWoww wraps up.

“I’m relieved my family’s not going to be on TV anymore because I don’t want my kids to grow up on TV. That’s not what I envisioned ever, and Jionni doesn’t really like it; it’s not his life. He likes me to do this stuff, but not him,” Polizzi says. But she would love to host her own talk show some day. Her dream guests? Her admitted girl crushes: Jennifer Lawrence and Jenna Dewan Tatum.

We have a feeling she might be too tired to pick up any hosting gigs right this minute. “You’re definitely not sleeping,” she says, noting the biggest difference between having one child and two. “With one kid, you kind of have that time off —  if you want to go to the gym…[But with two kids], you don’t really have that extra time that you need to yourself. So get ready for that.”

Her final tip for moms of two? “Try and shower at least once a week.”