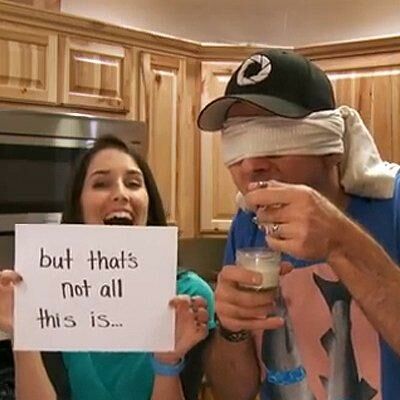 As an outdoor living vlogger chronicling his life in Alaska, Corey Williams is no stranger to adventure. So when his wife, Kristen, suggested she administer an adventurous taste test for his YouTube channel, DudeLikeHELLA, he was completely on board.

Once the camera started rolling, Kristen blindfolded Corey and began introducing foods one by one. As she coached him through the taste test, she also held up signs about the video’s real purpose: revealing her pregnancy.

“Corey thinks this is a taste challenge…but that’s not all this is,” one of Kristen’s signs read.

Corey veers off track when he starts to indulge in food No. 2, mashed avocados. “I almost want to finish it,” he laughs. No time for that, Corey! Kristen pushes him onward, handing him the next sample, which is a “HUGE surprise.”

“This brings back a lot of memories, and I enjoy this still,” he says, going off on a tangent about how it was his favorite as an infant. Kristen reels him back in, dutifully coaxing him to come to the realization she wants.

Kristen: “Any babies in particular?”

And there it is. Cue a whole lot of embracing, followed by Corey demanding to see the test, followed by more embracing. A little adventure buddy is on the way.