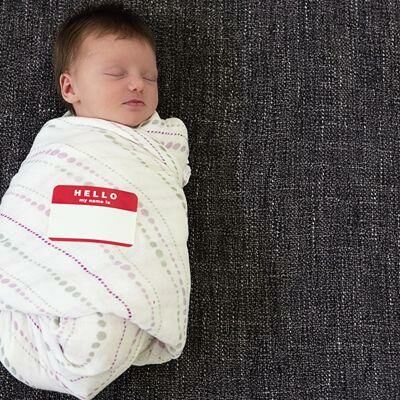 What’s in a name? As it turns out, important safety provisions.

A new study published in the journal Pediatrics shows that newborns’ “temporary” names, like Babyboy and Babygirl, can lead to major consequences in the hospital.

“There can be no delay in providing identification wristbands to newborns,” the study says. That means if there’s any kind of holdup to the naming process — whether you just can’t decide on spelling or baby must be whisked to the NICU  — the hospital must log a generic placeholder name anyway.

The guidelines for these names are pretty fuzzy, so a lot of newborns end up with similar or even identical names. Imagine the NICU receiving two Babyboy Smiths with the same times of birth, but with totally different medical needs. See the room for error? In fact, previous studies have shown that patient misidentification causes some of the most serious NICU mistakes.

Enter the leaders of the Pediatrics study. They tested a more specific naming system at Montefiore Medical Center: incorporating mothers’ first names into their newborns’ temporary names (think Wendysgirl instead of Babygirl). The results showed a drastic drop in wrong-patient errors. Over just one year, the incidents were reduced by 36.3 percent — more than a third.

TIME reports that in a survey of 339 hospitals, over 80 percent of respondents had unclear policies for temporarily naming newborns. The leader of this study, Jason Adelman, MD, MS hopes to inspire change in hospitals nationwide and create one standard policy.