The Best States to Raise a Family: How Does Your State Stack Up? 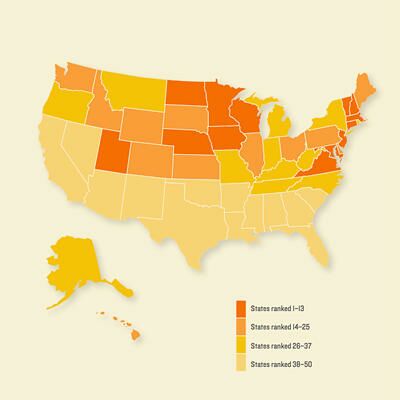 The results are in! Once again, the Annie E. Casey Foundation released its annual  KIDS COUNT Data Book, which looks at the well-being of American children. The state with the highest overall child well-being? Massachusetts.

(This is great news. I’m from Massachusetts.)

Time to recall that fifth grade geography; these stats point out a trend that won’t seem to go away. The northern states routinely rank better than southern. And poverty levels are the source of blame.

Compared to 2005, more kids are living in poverty — 23 perecent compared to 19 percent. That’s tied to unstable employment of their parents, which is also on the rise.

But there’s lots of good news about today’s kids. High school graduation rates, reading proficiency and preschool attendance are all up nationally. More children are covered by health insurance, and child and teen deaths have dropped from 32 per 100,000 to 26.

More than anything, what’s notable for you Bumpies is that we’re delivering healthier babies. There’s been a slight improvement in the number of low birth weight babies (less than 5.5 pounds), dipping from 8.2 percent to just 8 percent.  Hats off to Alaska, the state with the fewest low birth weight babies of all (5.7 percent).

With all this in mind, where are you going to settle to raise a family? There’s one more piece of the puzzle to consider: the not-so-tangible “family and community” factor. Based on that alone, New Hampshire is the place to be, followed by Utah and Vermont. These states had fewer single-parent families, less concentrated poverty areas and fewer teen births. The study also nods to the “strong institutions and the resources to provide safety, good schools and quality support services” which allow families and their children to thrive.

Do these results have you questioning where you want to plant your roots? If not, don’t worry, I’m not headed back to Massachusetts anytime soon.