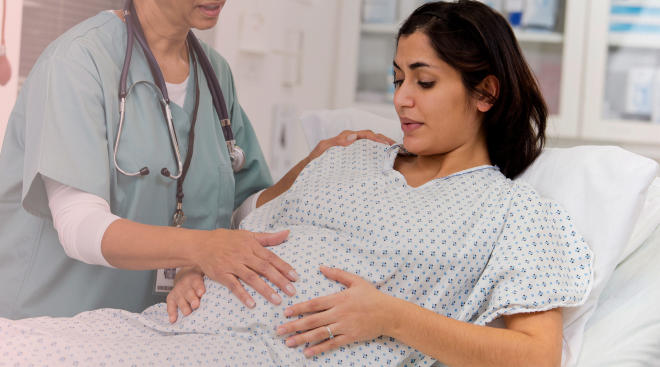 While there are a few subtle signs baby may be born breech, it’s not always simple for doctors to know beforehand. But researchers say routine scanning at 36 weeks could prevent 15,000 undiagnosed breech positions, more than 4,000 emergency c-sections and 7 to 8 baby deaths every year.

As your due date approaches, baby will begin to prepare for delivery by naturally shifting into a head-down position in your uterus. But for 3 to 4 percent of full-term pregnancies this doesn’t happen, and baby is left in a breech presentation. Breech babies can be born in three different positions: frank position (buttocks pointed towards the uterine opening with legs straight and feet near head), footling position (one of both feet pointing down) or complete breech position (cross-legged with buttocks near the uterine opening). In some cases, doctors may perform a version, where they attempt to push or lift your abdomen with their hands to help baby roll into the head-down position. Since there are a handful of risks associated with delivering vaginally when baby is breech, when a version doesn’t work, moms will typically give birth via c-section.

For the new study, researchers performed ultrasounds at 36 weeks’ gestation for nearly 4,000 women in England who were experiencing their first pregnancy. About 180 women had babies who were breech at the time of the scan, and 55 percent of these cases had no prior implications of a breech position. Spotting it at 36 weeks gave women the chance to opt for doctors to perform a version. When it was unsuccessful or if women declined the procedure, a c-section was arranged. None of the women opted for a vaginal breech birth.

The researchers say the additional scan could be made cost-efficient by using inexpensive, portable equipment to perform a simple ultrasound.