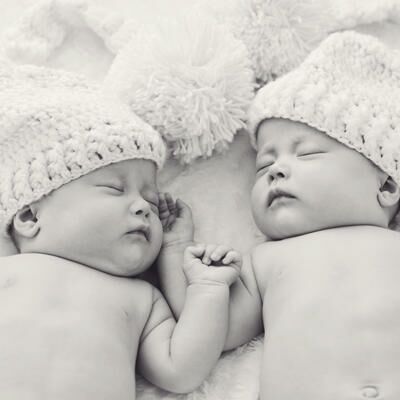 Kelli Wall and Kerri Bunker have quite a bit in common.

They teach at the same school. Their husbands are best friends. They’re twins. And they each just welcomed their second set of twins, born three weeks apart.

The newest Bunker babies were born at Timpanogos Regional Hospital on February 13, about three weeks after their Wall cousins.

“It’s a unique story, because I always felt like my twin sister and I had a special bond,” Bunker told KSL-TV. “And we’ve always kind of looked out for one another, and I thought ‘oh wouldn’t that be fun to have our kids experience that same thing.’"

When Wall learned she was pregnant with twins again, her doctor explained the likelihood was low; her hormone levels weren’t high enough for two babies. (And no, the likelihood had nothing to do with multiples typically skipping a generation; that’s a common misconception.)

Although she’d been told her odds of getting pregnant without medical assistance were low, Bunker decided to take a pregnancy test that day too, for solidarity’s sake. Shockingly, she was pregnant too.

“It was like just one shock after another all summer long,” Bunker said. The final shock? Bunker was expecting twins again too.

While the coincidences are almost too many to count, there is scientific evidence that you’re more likely to get pregnant when your close friends do. Referred to as “ childhood contagion,” the phenomenon shows that once your friend has been a parent for a year, your likelihood of pregnancy nearly doubles.

And yes, the women definitely consider themselves friends. Take it from Wall:

“Truthfully there’s nothing better than having a best friend with you all the time.”