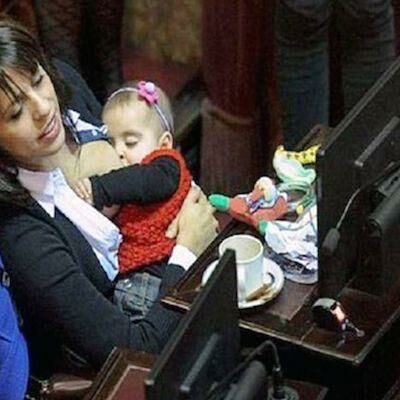 Earlier this month, Perez brought eight-month-old daughter Trilce to work. But this was not your average cubicle farm—since Perez, 37, is a politician, her office that day happened to be a parliamentary session at the nation’s capital. And when duty called (aka Trilce got hungry), Perez breastfed baby right there in her seat rather than leaving the room, a move that’s getting both praise and criticism after photo and video were posted online by a Peruvian newspaper.

Many Perez supporters are hailing the Argentinian MP as another positive role model for working mothers, while others are saying it was inappropriate to bare her breast for such a public feeding.

Perhaps one reason Perez seemed so relaxed to be breastfeeding in parliament was that this wasn’t baby Trilce’s first government go-round. In fact, this mini politician-in-training has already had face time with Bolivia’s president and joined mom to meet with constituents. Not too bad for baby’s first year.

Let’s support public breastfeeding and show the world that moms stand united when it comes to the right to feed their babies. Join The Bump’s Boobolution — our fourth-annual initiative to proudly support and empower moms to breastfeed. Anytime. Anywhere. Sign our pledge to support #Boobolution Day on August 7!