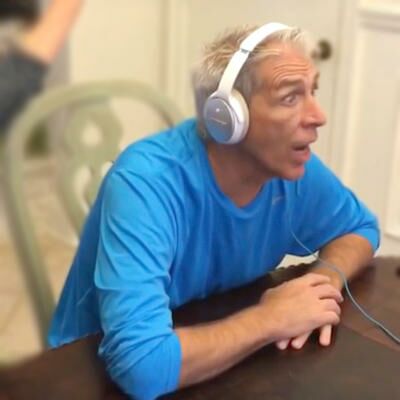 While parenthood may not be all fun and games, that concept clearly doesn’t apply to pregnancy announcements. Texas mom-to-be Alexa Goolsby decided to take a page out of comedy genius (and dad) Jimmy Fallon’s playbook by telling her parents she was expecting while they played their own rendition of Fallon’s famous " Whisper Challenge," a fan-favorite featured on The Tonight Show.

The game involves one player wearing a pair of noise-cancelling headphones while attempting to guess what the other player is saying using only some intense lip reading abilities. And this resulted in one of the most unique and truly hilarious pregnancy announcements we’ve ever seen.

After Goolsby's parents put on their headphones, their son-in-law repeatedly said, "You are going to be a grandfather." While Alexa’s mother figured the message out almost immediately, her husband took a bit longer. After the extremely passionate, determined, and slightly loud grandpa-to-be realized that he was not, in fact, being called mean or about to take a trip to the beach, his reaction was priceless.

On Monday, Goolsby posted the video to her Facebook page with the caption, "This was definitely a family game day for the books!" We couldn’t agree more.