Prevention is in the hands of everyone around your infant.
ByAnisa Arsenault
Associate Editor
PublishedJul 2016 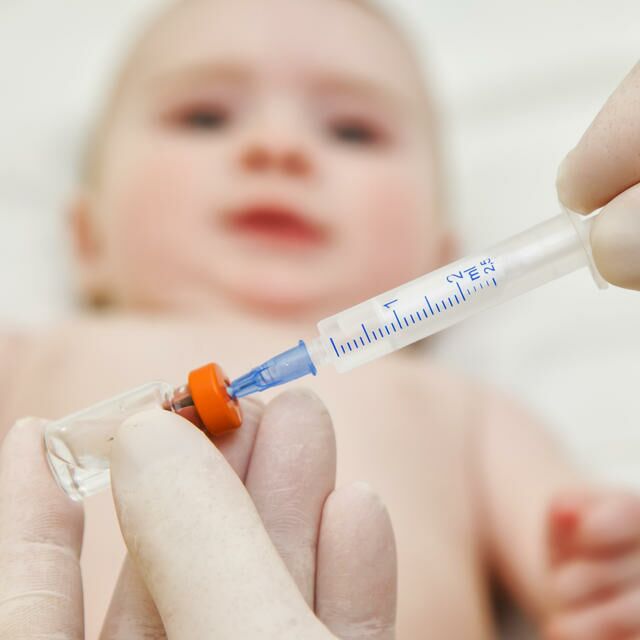 A second California infant has died from pertussis, better known as whooping cough, this year. The 5-week-old San Diego baby passed away on Friday.

Why is this happening? The CDC explains that pertussis is cyclical in nature, peaking every three to five years. Depending on the cycle, the United States sees anywhere between 10,000 and 40,000 cases each year, and up to 20 deaths. In 2014, the most recent year with available data, 32,971 cases of pertussis were reported.

About 50 percent of babies younger than one year old will need to be hospitalized if diagnosed with whooping cough. Since babies can’t get the Tdap vaccine, which protects against pertussis, until 2 months old, it’s especially important that parents, family and friends are vaccinated. Pregnant women are encouraged to receive a booster shot during their third trimester, since their antibodies will be transferred to their newborns, offering protection early in life.

Cormit Avital, an Australian mom who opted out of the vaccination during pregnancy, learned exactly how important prevention is. She contracted a mild case of whooping cough just after giving birth, but because she deemed herself healthy, she refused the vaccination. Her new baby quickly contracted a case of pertussis that was anything but mild.

“Being the healthy, fit, organic woman that I am, I said ‘Leave me alone. I don’t need this crap,’” Avital says in a video, explaining she was offered the vaccine while pregnant. “Even me, the bulletproof lady who’s never been to a doctor and has traveled the world and felt healthy, got whooping cough. I got over it very quick; it was nothing for me. But [Eva] is into week four."

It’s not easy to watch or hear babies with whooping cough, but another mother, Rebecca Harreman, shared a video of her red, wheezing 4-month-old son in an effort to demonstrate the importance of vaccinations. Brace yourself; it’s painful.

Once baby is old enough for Tdap immunization, it’s important to stay up to date on followup dosages of the vaccine. The CDC recommends at least five doses of the vaccine before kindergarten: at 2 months, 4 months, 6 months, 15 to18 months, and 4 to 6 years. Additionally, your child will need a booster shot by age 11 or 12.

The Tdap vaccine is one of many important immunizations. Take a look at our list of which vaccines baby will need and the ages he or she will typically receive them.