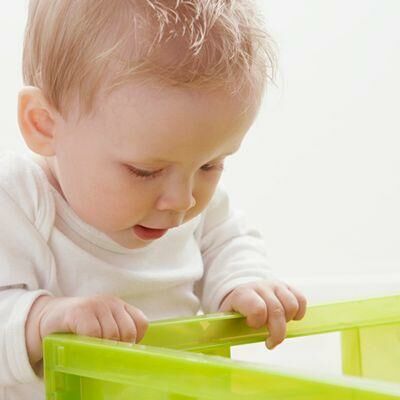 As parents of an 11-month-old, our home is bursting with obnoxious toys: there’s  Latke Larry, a Jerry Stiller-voiced singing Jewish robot who croons about potato pancakes; then there’s the  Baby Einstein Take Along Tunes, a handheld music box that blares out the  William Tell Overture on infinite repeat.

But nothing — nothing — makes me want to stab myself in the eyeballs quite like the  V-Tech Spin ‘n Learn Top.

According to the manufacturer, the “interactive” Spin 'n Learn Top “has lots of ways to get baby started learning early,” including animal names, numbers, dancing lights and “silly sounds.” This includes a maniacally giggling dolphin who sounds eerily similar to Jack Nicholson’s Joker character after sucking on some helium, and an 11-year-old hyper-caffeinated girl scream-chanting, “TAKE A SPIN AROUND THE SEA, MAKE NEW FRIENDS, FEEL THE BREEZE!” There appears to be no. volume. control.

I normally love V-Tech’s line of toys so I’ve allowed this bad acid trip of a product to remain under our roof, but yesterday’s latest hallucinatory migraine pushed me over the edge. And so, I will be placing the following ad on Craigslist: ’ Free to a Good Home: World’s Most Annoying Toy.'

The ad will read:

Barely-used, much-despised, nine-inch tall V-Tech Spin 'n Learn Top available at no cost to a good home. Originally purchased for $15 by a well-meaning grandmother, this multicolored plastic auditory Molotov cocktail features a punch-drunk octopus, a hysterical galloping turtle and a lobster with “Side of Drawn Butter” written all over him. Ideal home is larger than 3,000 square feet to allow ample sound-dispersing room between parent and child; hearing impairment with mutable hearing aid buttons a plus. Please do not contact Seller to complain; she cannot hear you, as her ears have already bled out.

What toys drive you crazy?