The Year of the Mother: It's Time to Support Fellow Moms 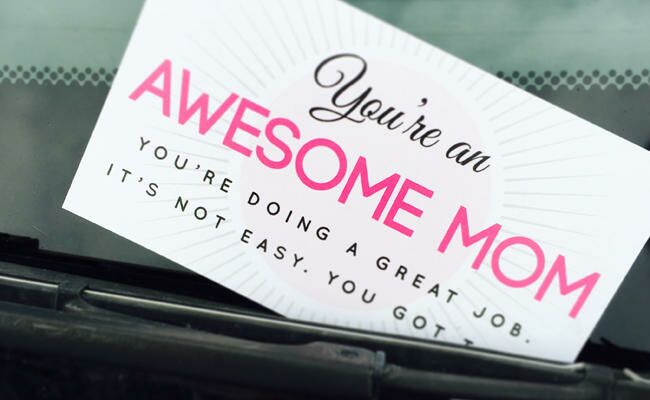 Photo: The Pump and Dump

Meet Shayna Ferm and Tracey Tee, the ladies behind  The Bump Pump and Dump Validation Tour. These Denver-based moms are here to remind you that even on your worst parenting day, you’re doing a great job. And whether it’s via song at their parentally-incorrect live comedy shows or via blog post on The Bump, they’re guaranteed to make you laugh.

We know you’ve been there–it’s happened to all of us. Your kid is screaming so seriously loud inside of Target that you are contemplating leaving him right there in the cart at the end of the deodorant aisle. How dare you have removed the paper from the cupcake you bought him for being good! He wanted to eat that paper! The looks you’re getting from the employees because you yelled back at your baby are like daggers to your uterus. And you hate yourself as you frantically take out your phone for him to watch a YouTube clip because it might be the only thing that will calm him down. You still have three items left on your list!

Just then, a stranger walks up to you and you think, “oh God, oh God, oh God, now I’m really gonna lose it.” But instead of judging you, she quietly hands you a card that says “You’re an awesome mom. You got this,” as she nods at you in solidarity and walks away.

The Pump and Dump has news for you: 2016 is The Year of the Mother. We’ve declared it, and we’re making it happen so that scenario becomes the norm, not the exception.

This is the year to be kinder to ourselves and to each other. This is the year to spread humor and generosity, mom to mom, because, you know what? We are all in this together. So as part of our Year of the Mother campaign, we’ve created what we call “Mom Karma Cards” for you to keep in your purse and hand out at will to moms in need of validation (which is really all of us).

We launched this campaign a few weeks ago and already have heard some amazing stories of the Mom Karma Cards at work. Here are a few doozies—you might want get out your tissues.

“I gave a Mom Karma Card to a woman on the side of a mountain who was hiking in snow shoes with a baby in a front carrier. She was totally rocking it, but I remembered how hard it was to just carry a baby like that down a street. My back hurt just thinking about it. So I handed her a card I had in my jacket pocket and she was so grateful.”

“My neighbor just went back to work after her third baby. She was having a super hard time with it, so I snuck over early in the morning and left a Mom Karma Card on the windshield of her car.”

“I ran into a mom outside our son’s daycare when she was going through her fourth miscarriage as they tried for baby no. 2. We talked for a bit about how terrible she was feeling. When we went inside to grab our boys, she was sitting with her son, putting his shoes on, and I handed her the Mom Karma Card. She burst into tears and said thank you.”

“I was using the bathroom at a restaurant and was staring at the baby changing table. My kids are both potty trained now, but I was thinking back to how much it used to suck to change dirty diapers in public places for so many years. So I put a Mom Karma Card on wall next to the changing table, hoping to catch a mom by surprise.”

You guys… this is what the Year of the Mother is all about. It’s about empowering each other and giving ourselves a break, no matter what kind of mom you are. It doesn’t matter which products you use or refuse to use, which sleep training method worked for your kid, which doctor you go to, or whether you use cloth diapers or disposable. C-section moms, home birthers, placenta encapsulators—we all are raising humans and this sh-t is hard! Let’s band together for once.

We have learned so much from performing and growing the Pump and Dump show over the last three years. Our show has become a really great mommy equalizer, and a safe place where we can all laugh at the things we have in common as parents, and as mothers. In order to reach out to more moms and to continue to do more awesome stuff for moms, we launched our Year of the Mother Kickstarter Campaign on Jan. 11. We have until Feb. 10 to reach our goal. Mom Karma Cards are just some of the awesome rewards you get by becoming a “Founding Member” of The Year of the Mother movement.

Will you join our #BandOfMothers?

For more information on The Pump and Dump and our 2016 tour dates, please visit www.thepumpanddumpshow.com