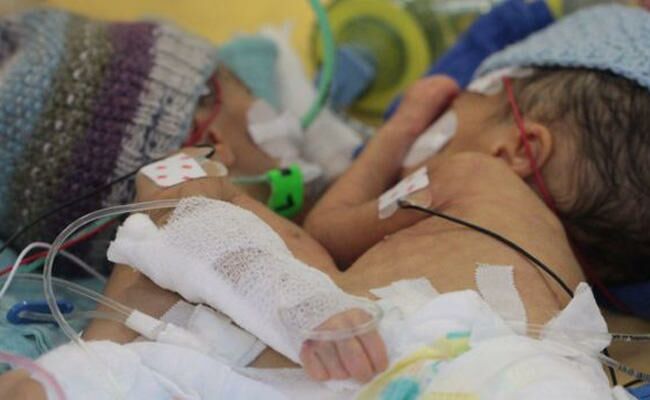 Against all odds–99 percent of odds, to be exact—8-day-old conjoined twins have been separated in Switzerland, making them the youngest and smallest duo to successfully undergo the surgery.

Lydia and Maya, born at the Inselspital hospital in Bern, Switzerland, in December, were scheduled to have the surgery a few months later when they were stronger and healthier. But when their health took a turn for the worse, doctors knew they had to operate immediately, in spite of the 1 percent odds associated with the surgery.

Weighing a total of 4.85 pounds together, the babies, born eight weeks premature alongside their separate and healthy triplet, had their own vital organs but shared a liver.

“They had great problems, because a very great amount of blood flowed from one child to another through the liver. That is why one child had too much blood and blood pressure that was much too high, while the other child did not receive enough blood and had blood pressure that was too low,” reads a hospital statement, released yesterday. “Such small conjoined siblings had never been successfully separated before. The livers of the two girls were extensively conjoined, and the large blood vessels passing through the livers had to be separated.”

Additional surgeries needed to be performed to close their abdominal walls, contributing to the delay of this happy news. The girls are now recovering in the pediatric intensive care unit.

“The perfect teamwork of physicians and nursing personal from various disciplines were the key to success here,” says Steffen Berger, head of the Department of Pediatric Surgery. “We are very happy that the children and parents are faring so well now.”