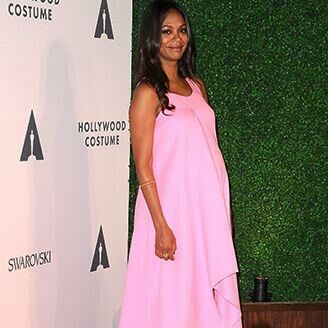 Zoe Saldana definitely has a wink-wink nudge-nudge way of letting us in on her pregnancy details! First, she confirmed her pregnancy by rubbing her baby bump in an ALS Ice Bucket Challenge video, and now she confirmed the report that she’s expecting twins with her husband Marco Perego  with a clever little joke.

The Guardians of the Galaxy actress looked red carpet-radiant in a flowing pink maternity gown at the opening of the Academy of Motion Picture Arts and Sciences’ Hollywood Costume exhibit in LA on October 1.

E! reports that when asked if she was dressing up for Halloween this year, Zoe slyly rubbed her bump and said, “I might. I might need three costumes. I might have to make some adjustments, but it would be nice.”

If she has October babies, we hope that she shares photos of their Halloween costumes — or at least dresses her twins in blue onesies so they can be baby Avatars!

According to the outlet, Zoe is “thrilled” to be expecting two babies with her husband, who she’s been married to for over a year.

What was your baby’s first Halloween costume?