The Most Amazing Birth Stories of 2017

From hurricane babies to moms who delivered in the most surprising places, read these birth stories and just try not to cry. 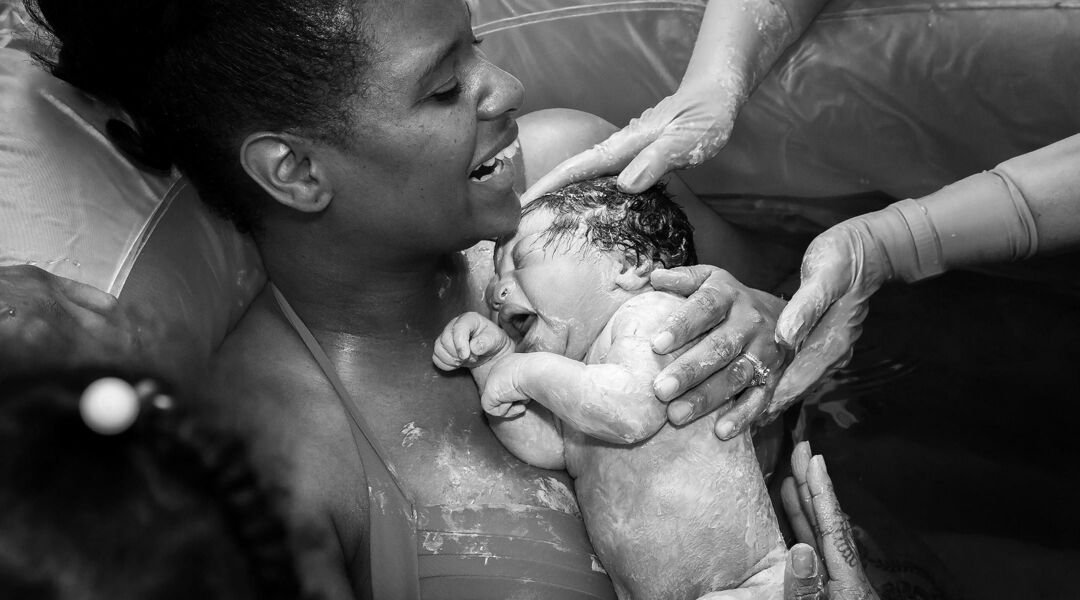 The best birth stories tug at your heart like nothing else can. This year was packed with plenty of amazing tales, all reminding us that parents and siblings can be superheroes and babies are truly a miracle. Here are the birth stories of 2017 that we’ll never forget.

1. The OB Whose Water Broke While Delivering Her Patient’s Baby

You hear plenty of birth stories where women have had their water break at work, but things get a little crazy when your work is delivering someone else’s baby. One doctor in Iowa actually went into labor while delivering a baby. Emily Jacobs, MD, told the Iowa City Press-Citizen that she didn’t notice at first and assumed the amniotic fluid on her scrubs was from her patient. “It’s funny how fast you go from being a doctor to a patient—and you’re freaking out,” she said. “One minute you’re in control, and then the next, you’re not.” Jacobs’ baby boy, Jett Eric Jacobs, was born at 36 weeks and one day with no post-birth complications. “I think all of this will make me a better doctor,” Jacobs says. “Now I can empathize with my patients 100 percent.”

2. The OB Who Left Her Own Induction To Deliver Someone Else’s Baby

Kentucky doctor Amanda Hess, DO, was getting ready to be induced to deliver her second child when she overheard that another woman needed to be delivered right away. The last on-call doctor had just left and another was on the way, but the baby’s umbilical cord was wrapped around her neck. So what did she do? “I put on some boots over my flip flops and found another gown to cover myself up,” and delivered the baby herself, she told WLEX18. Hess’s contractions started a few minutes after she delivered the baby and she gave birth to her own child, daughter Ellen Joyce, soon after. “I had actually taken a call the day before, so I thought really that I was working up to the last minute,” Hess says. “But this was literally 'til the last second.’”

3. The Baby Born With a Coned Head

Babies don’t always look the way you imagined when they’re first born, and that’s completely normal. Photographer Kayla Reed reminded us of this when she shared photos of one of the most visually amazing birth stories we’ve seen this year. Here, baby Graham arrived looking adorable, “right down to his little cone head.” His head was born pointy on top as the result of his position in utero. But don’t worry—within a few days, it rounded out and became “perfectly-shaped,” Reed says.

4. The Boy Who Delivered His Baby Brother

Louisiana mom Ashly Moreau’s water broke when she went to use the bathroom and, when she looked down, she saw her baby’s legs sticking out. She was only 34 weeks pregnant and was at home alone with her 10-year-old son Jayden Fontenot and her 11-month-old daughter. Moreau told her local news station KPLC that Jayden ran to the bathroom to find her bleeding on the floor before going to his grandmother’s house, who called 911. However, the grandmother wasn’t able to get to Moreau, so in one of the most heroic birth stories of the year, Jayden stepped in to help. "When he got to the bathroom, he just took a deep breath and said, ‘Okay, Mom, just tell me what I need to do,’ " Moreau said. "He didn’t look scared, he looked calm and brave, and I said ‘Okay, I’m going to tell you what to do and we need to get your brother out as fast as possible because he’s breech and he can’t breathe.’” Jayden pulled on the baby’s legs while his mom pushed. The baby wasn’t breathing when he was born a few minutes later, so Jayden had to run to the kitchen to get a nasal aspirator. The baby started breathing, and medical help arrived soon after. Doctors said that Moreau and the baby could have died without Jayden’s help. Luckily, both are doing great thanks to this heroic brother.

5. The Sister Who Took a Delivery Room Selfie

When Kat Armendariz shared a selfie on Imgur with her sister in labor in the background, it quickly became of the year’s viral birth stories. “SELFIE! While my sister is about to shove a baby out her vag,” she captioned the shot. People were critical at first, but Armendariz later told Mashable that her sister gave her permission to share the picture and that she’s also mom to five children. “She wasn’t in too much pain at first, so she thought it was pretty funny,” Armendariz said. “I told her I was going to do it, she just started the oxytocin and the labor pains began almost instantly. She started to feel it and right when she was like, ‘Oh my god I can’t take this,’ I took the photo.”

6 .The Baby Who Outwitted Mirena

Baby Dexter Tyler had an unusual social media birth announcement. In the photo, which Alabama mom Lucy Hellein posted on Instagram, baby Dexter is clutching an IUD. “Mirena fail!” Hellein captioned the photo before going into Dexter’s birth statistics. Dexter wasn’t born holding the IUD, Hellein clarified, but it was found behind the placenta.

7. The Girl Who Delivered Her Baby Brother

Mississippi tween Jacee Dellapenna, 12, was incredibly hands on when it came to the birth of her baby brother, Cayson. Jacee helped catch Cayson and even cut the cord. But photos of her reaction, which were posted on Facebook by family friend and singer Nikki Smith, are everything. Jacee didn’t plan on helping so much, but her mom’s doctor gave the okay if she was up for it. “Doctor Wolf said, ‘Why don’t you just let her suit up and deliver the baby?’” mom Dede Carraway told Mississippi News Now. (Carraway’s doctor guided Jacee’s hands the whole time.) Jacee said she was “really nervous” at first but, she adds, “It was the best moment of my life.”

Mid-storm birth stories abound, but this one was especially dramatic. When Hurricane Irma bore down on Miami, one local woman went into labor and had to deliver her baby at home by herself while the Miami Fire Department coached her over the phone. The baby was named Nayiri. Her middle name? Storm.

9. The Mom Who Helped With her Own C-Section

Australian mom Sarah Toyer knew her fourth baby would be delivered by c-section, just like her other babies—but she also knew she wanted to help deliver her baby. “When I discovered I was pregnant I was determined to have a maternal assisted c-section,” Toyer wrote on Facebook in a post picked up by Birth Without Fear. “I talked to every midwife, doctor and surgeon about what I wanted to do, but they all said it would depend on the surgeon on call that day.” The day of the birth, Toyer wound up with a surgeon who was okay with the idea. So she scrubbed up just like her doctor before her birth. “Maybe half an hour later, I was lying on the operating table watching my son’s head being pulled from my womb,” she wrote. “I reached down and put my hands under his arms and lifted the rest of him out of my own body. It was the most incredible thing I have ever done.”

In one of the sweetest birth stories of 2017, a new dad in Nebraska recruited his newborn son, Ryder, to help him propose to Ryder’s mom while they were still in the hospital. Darick Mead pinned an engagement ring to an adorable onesie that read, “Mommy, will you marry my daddy?” Mom Susan Medina told Buzzfeed that she didn’t see this coming, especially given that Mead said they wouldn’t be married “for at least 40 years,” so she wouldn’t know when he planned to pop the question. Medina says she was “super overwhelmed” by the whole thing. (She said yes.)

With his wife, Lauren, in labor, dad-to-be Noah Strunk sped to the hospital, but missed a turn and ended up at a closed entrance. When he started to turn around, though, Lauren told him to park the car. “I said, ‘You’ve got to catch this baby,’ and he said, ‘Right now?’ I said, ‘Yes, right now!’” she told TODAY. Stephanie Knowles, the Florida couple’s birth photographer, whose car was following theirs, captured the whole birth, including how Lauren instinctively grabbed her baby boy by the arm after he was born.

Jynessa Weed had already had three induced labors that resulted in c-sections, and she assumed her fourth birth would be the same. Still, she had all the gear at her house for a water birth, just in case. Weed felt a pinching her cervix one day and, after seeing her midwife, discovered that she was three centimeters dilated. Still, she thought she had time, so she met her mother-in-law for a pedicure before realizing her contractions were getting worse. When she got home, her birth team set up her pool and she changed into a sports bra and shorts. Unfortunately, she had painful back contractions that she called “pretty much hell on earth,” in a post on photographer Kourtnie Elizabeth’s Facebook page, KE Documentary. Weed lay against her husband and her baby was out in three pushes. “I couldn’t believe I had done it! I got my home-birth, water birth,” Weed wrote.

13. The Teacher Who Finished Her Lesson Plans During Labor

There are tons of birth stories of babies coming when you least expect them, and it can be tough to get everything in order before you give birth. Which is why teacher and mom-to-be Jennifer Pope found herself finalizing her lesson plans from her hospital bed while she was in labor. Her friend and birth photographer, Andrea McDonald of Rooted in Love Photography, captured the whole thing and shared it on Facebook. “No, she is not doing her taxes. Those papers would be her lesson plans her husband is about to go drop off with her sub in the parking lot,” McDonald wrote next to a photo of a smiling Pope holding her lesson plans. “Also, next week is Teacher Appreciation Week here in Texas. Spoil them rotten because even in labor, they care. No lie, she gave birth less than an hour later.”

14. The Mom Who Gave Birth Right Before Her Wedding

Michigan couple Jael and John Pulcipher planned to get married weeks before their baby was born, but their daughter Briar decided to show up eight weeks early. Jael’s water broke on the morning of July 25, four days before the couple’s wedding day. She still hoped to get married first, but her midwives wouldn’t let her leave the hospital. So Jael and John set up an impromptu wedding on a lawn next to the maternity ward. Briar was born at 12:42 p.m. and the couple decided to move the ceremony and reception to a hospital conference room. While Jael got ready for the wedding, which was at 6 p.m., John hosted a name and gender reveal party for their guests. Briar made a brief special appearance at the wedding, and Jael was wheeled back to her room in a wheelchair with the perfect sign hanging from the back: “Just married.”