How I Accidentally Gave Birth on the Bathroom Floor

Sometimes baby just won’t wait! Here’s how childbirth went down for Jessica, from her own vantage point—<em>and</em> that of her friend who witnessed it all. 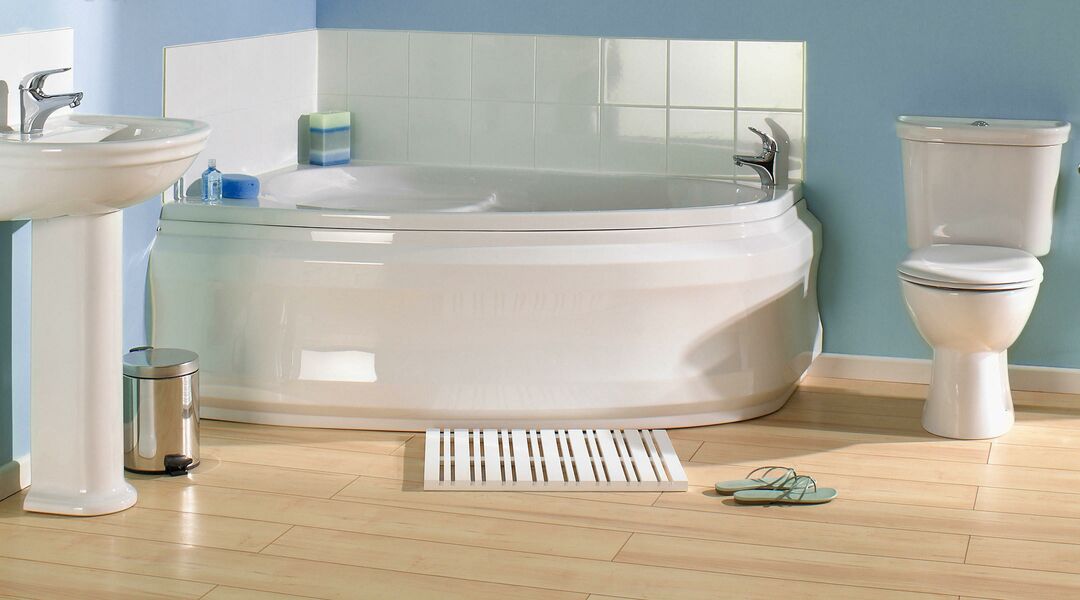 It was winter, six years ago, and a blizzard had just socked the Northeast. Snow was everywhere. But other than that, Jessica—mom of then-15-month-old Adam, with another on the way—expected it to be like any other typical Friday morning in their Bayside, Queens, home. Sure, she was 4 to 5 cm dilated and 80 percent effaced, according to her doctor at an appointment just the day before. But since her first child took a while to progress before actual labor, neither Jessica nor her husband, Sam, were worried. He took off for work, which was an hour away, and they figured she’d probably deliver at some point over the weekend. She had forgotten that she made plans to have her friend Belinda take the train over for coffee that morning, so she went about her routine. Little did she know, the day was about to take a very different turn. Here, Jessica and Belinda each recount what happened.

Jessica: Mornings start with Adam playing and talking to himself in his crib for about 15 minutes. I get him his milk and then we sit down for breakfast. I had cramping here and there, but nothing unusual. The only thing that felt different was that I didn’t have an appetite—usually, I’m starving by the morning—but I thought nothing of it.

Soon, though, the cramps grew stronger, and they were happening in a series. Just before 9 a.m., I put Adam in the exersaucer in front of me in the bathroom. That’s when I noticed a bit of blood and mucus on the pad I was wearing. Maybe this was my bloody show? But I knew that it didn’t necessarily mean anything. During my last pregnancy, I had my bloody show several days before my actual labor. I called Sam, and we decided that I would email or text any updates, but would call again if I felt like it was the real deal.

Sam was on deadline at work, so the last thing I wanted to do was make him drive all the way home from Connecticut, and have it be a false alarm. I called my mom as well and told her she should slowly pack her bags and get ready, but I didn’t want her to make the hour’s drive in the snow for a false alarm either.

Slowly, though, the “cramps” were getting more and more painful. But they were short and I had forgotten how long they were supposed to be. Were these the real ones? Or just stronger Braxton Hicks?

9:36 a.m.: I emailed Sam: “Dunno what’s going on. I’ve been having contractions like every 5-10 mins…but pretty short and more and more painful. Like I have to stop whatever I’m doing…

Hetty didn’t respond, so I looked it up online. It said contractions may last anywhere from 30 seconds to 1 minute. Crap! I started feeling the piercing pain right by the groin area, which apparently meant the baby’s head was traveling down the birth canal. Double crap!

10:04 a.m.: I called Hetty, letting her know my contractions were minutes apart. She advised that I get to the hospital asap. I let her know that Sam was still at work and that I was alone (with Adam).

From here, the exact order of events and their duration were a total blur. I was in excruciating pain, and I couldn’t give Adam any attention. I remember being in and out of the bathroom and on all fours because it was so, so painful. And yet I didn’t want to call an ambulance because I didn’t want to leave my son alone with a stranger.

Then, the doorbell buzzed. It was my friend Belinda with coffee cake in hand and a huge smile. I totally forgot she was visiting! When I opened the door, the smile turned into shock. My pants were down and she has no idea what she just stepped into. I don’t know if I felt relief that another adult was there, but looking back….oh, how the story would have been different if she didn’t walk in right then. I was moaning and groaning in pain and Belinda was asking how she could help.

Belinda: I tapped on Jessica’s window before ringing the doorbell and heard Adam crying. But I didn’t think anything was out of the ordinary until she came to the door—screaming that her water had broke and she was in labor—and then ran back to the bathroom. I could hear that she was already on the phone with her doctor or Sam. I didn’t sweat it because I thought she would have time because—I don’t know—don’t women usually have like at least an hour before the baby comes?!?

I said, “What can I do for you, Jess? Can I get you anything?” and she told me to just watch Adam. I held him in my arms, and he was crying so hard while Jessica was screaming. Then she said: “Belle, water!”.

Jessica : I think I just asked Belle to watch Adam because he was climbing up the window sill. For some reason, the bathroom was my hideout—I was on all fours and clenching the doorknob asking Belinda for a glass of water to drink. Mind you, Belinda doesn’t know her way around my place, nor did she know how to handle a big 15-month-old boy. But I kept yelling: “Water! Belinda! Water!”

At this point, the phone was on the floor and I was on speaker with Hetty. I was shouting, “The baby is coming! The baby is coming!” She urged me to get Sam to take me to the hospital. I responded: “He’s an hour away in Connecticut!”

I called Sam. He said he was on his way and that he called an ambulance.

I called James, a friend who had mentioned that he could be back-up if Sam couldn’t get to me in time. Unfortunately, he was in Brooklyn that day (probably a little more than an hour away) with another mutual friend, Eugene.

I called Cindy, my sister-in-law, who lives two towns over, but her car was buried under the massive snow, and it would take her a little while to get to me after digging her car out. Waiting for a cab to pick her up would have taken just as long.

James called me back. Eugene’s mother-in-law lived around the corner from me, and could come if I thought I needed an extra hand. I said “Yes!” and hung up the phone.

Little did I know, everyone would all be just a little too late. Everything was happening so fast and suddenly I was screaming, “The head is out! The head is out!”

Belinda: I probably should have been moving faster than I was, but I had Adam and he was squirming. Then I heard Jessica scream a second time "Belle, the water!” When I brought it to her, she was clutching the doorknob as if her life depended on it. For a few seconds, she stopped screaming, and managed to say: “Oh my gosh, it’s coming!” The next thing I knew she was down on all fours and screaming, “The baby’s head is out!”

Jessica: At that point, I knew I just had to push. I timed the contractions and pushed once, and the baby slid to the floor. No, I wasn’t able to catch the baby. She slid onto my yellow bathroom mat. Shocked and still in panic mode, I heard her cry. Her crying gave me a bit of relief.

Belinda: Within a blink of an eye, the baby glided out. She didn’t make a thump or anything; she just slid. I remember thinking to myself (but didn’t say aloud): “Holy crap, there’s a baby on the floor!”

I didn’t want to freak Jessica out, so I kept my thoughts to myself and started to say a prayer aloud. Almost immediately Jessica started dialing her doctor again, but she didn’t pick up. Jessica just kept saying, "What do I do? What do I do?” And all I could say was “It’s okay, Jess; don’t worry, Jess, everything’s going to be okay”.

But honestly I didn’t know that it’s actually normal for a baby to be a little bit blue when she’s born, and I was really scared. I had called 911 at some point and hung up because they asked for Jessica’s address, and it was taking me too long to figure it out. Thankfully, within a few minutes after Jessica delivered her baby, Hetty arrived. She ran in and took over. I was so relieved because I don’t know what we would have done. I still had Adam in my arms when I finally heard the baby let out a cry.

Jessica: Soon Hetty rushed in and cut the cord. I was surprised she was here! All she had in her hands were a sterilized clamp and scissors. She checked that everything had come out, and wrapped the baby in a towel. The lighting wasn’t good and she urged us to get to the hospital as fast as possible. I put a pad on, sweats and my down winter coat and walked out to the living room.

Belinda: Hetty was so calm. She helped Jessica cut the umbilical cord, and I remember Hetty saying, "Awe, Jess, you did it!” Jess kept asking if the baby was okay because she slipped onto the floor. She was worried about the baby’s head but Hetty assured us, saying babies are strong and it was okay. Jessica asked if she should push the placenta out, but it was already on the floor. I held the baby while Hetty did a final check. The baby was so perfect. I showed Adam his baby sister, and he started to smile.

The doorbell rang. It was Jessica’s friend’s mom and Cindy. I’ll never forget the look on Cindy’s face when Jessica told her she already had the baby. She was in disbelief! Aside from some stomach discomfort, Jessica looked totally poised. I don’t think anyone would have even guessed that she just gave birth to a baby in her bathroom!

Jessica: Hetty held the baby as we stepped outside in the freezing cold to wait for the ambulance. We waited a good long time, and we contemplated taking her car, but I didn’t want to bleed all over it! Eventually, the ambulance slowly pulled up, and we quickly climbed the mound of snow to get in.

Belinda: Just as we went outside, an ambulance pulled up, and within minutes after that, Sam’s car arrived too. We told him Jessica was already on her way to the hospital—with his new baby girl.

Jessica: We ran into a few snafus on the way to the hospital—the paramedics initially insisted that we call another ambulance for the baby (because that ambulance was called only for one person—me) and hospital wouldn’t release the baby from the NICU because I didn’t have the appropriate paperwork. But it eventually all worked out, and when my daughter was placed in my arms, I was finally able to take everything in. She was perfect—and she still is.