11 Worst Things to Say to Moms of Multiples

Why is it that just because you've got twins (or more!) people think it's okay to say ridiculous things to you? Check out what moms (and moms-to-be!) of multiples hate to hear, and how they’d like to respond. 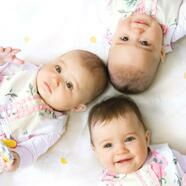 “ ‘Are they natural?’ You don’t go around asking parents of singletons how they were conceived, so don’t ask a parent of multiples.” — Lilystar82

“ ‘Did you plan on having twins?’ Well, we planned on getting pregnant, so yes we did.” — Ladynikon

“ ‘I have two kids 16 months apart. I think that’s harder than twins.’ I didn’t know it was a contest.” — MuseumMaven

“ ‘Oh, that’s not like having real twins, like two boys or two girls.’ Nope. Pretty sure I have real twins.” — Smcgervey

“ ‘Wow [you’re pregnant with multiples?]! You are going to get so big!’ Do not talk about my weight. You’re never supposed to tell a woman she’s big, even if she’s pregnant with twins! And thank you for stating the obvious. — Mossyoakgrl

“ ‘[Pregnant with twins?] That’s impossible! You’re too skinny!’ I wanted to cry — it’s a big deal for me to make sure my babies are going to be a healthy weight when they are born. Comments like that put my worries into hyperdrive.” — Sugacattey

“ ‘You’re done, right?’ I don’t need anyone telling me how many children I should or shouldn’t have.” — Lucyrocardo3

“ ‘Oh, twins must be so easy, since they have a built-in playmate!’ No, that just means twice the work and a lot of refereeing!" — Macchiatto

Identical or Fraternal: What does it mean?