My Life as a Mum in London, England

Cheers from England! A mum of one (with another on the way!) reveals what it’s like to raise a family in London. 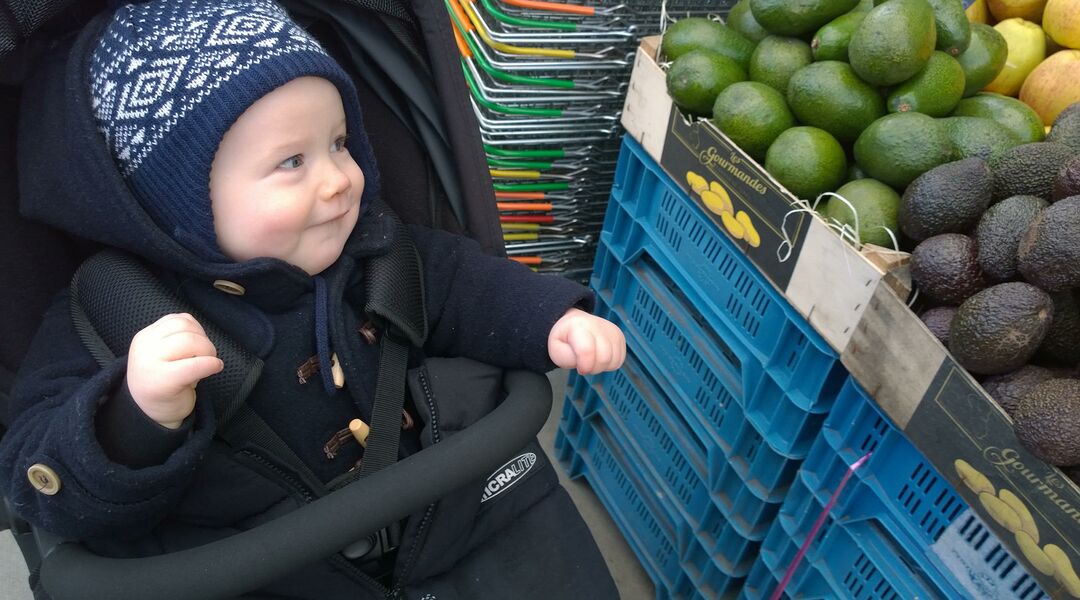 “W, X, Y and zed!” Whoa, wait, did my toddler just triumphantly end the alphabet song with “zed”? Sure he was born here, and has both US and UK passports, but the Britishisms spouting from his two-year-old mouth is still a shock to this very pregnant American mother (I’m due with my second in August). Every day he excitedly points out the “lifts” and “bins” to his “mum,” but that’s to be expected. My husband Alex, who is British, and I’ve lived here in London long enough that even my vocabulary is a bit of a mash-up of UK and US words—once you’ve been an expat for a decade some lines tend to blur.

Nearly 10 years ago, I decided my once red-hot love affair with New York City had cooled and it was time for a change. My 30-something self was craving a new experience — as in I moved from Brooklyn Heights to London and enrolled in university for a master’s degree in environmental science and found a place to live in a single flat at the top of a big Victorian terrace house. After graduating the following year, I found a company willing to sponsor me for a work visa. I met my husband-to-be, a Brit, a few years later, and after we got married I successfully applied for an ‘indefinite leave to remain’ visa in my passport (you can stay forever and you can work, but you can’t have a UK passport or vote). 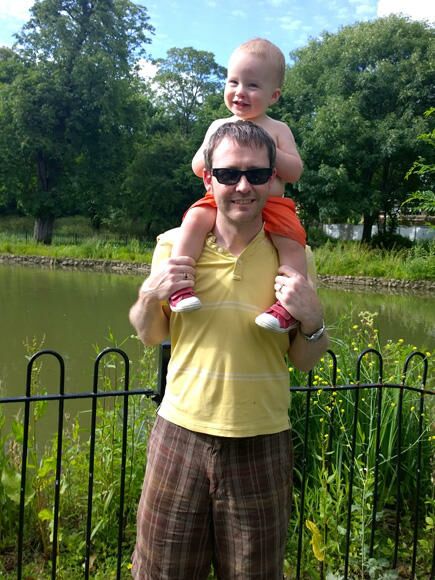 I’m expecting at 40, which in the States is considered on the older side, but it’s actually quite common for British women to become pregnant in their late 30s and early 40s. Most of the women in the prenatal class (or as it’s more commonly referred to here, “antenatal”) I participated in during my first pregnancy were over 35. These classes are common for new mums-to-be, and the most popular program is run by the NCT (National Childbirth Trust) and led by trained facilitators. Here, you’ll meet other local couples due around the same time. The two-day course covers labor and delivery (with a bit of a natural-birth slant when discussing birth plans) and breastfeeding. This is where most people meet their fellow mum friends, and sometimes the dads even stay in touch as well.

I never knew how much I gained during my first pregnancy, and you don’t hear women talking about specific pregnancy weight gain figures, and I think that’s a good thing.

There’s also a fairly relaxed attitude here about drinking the occasional glass of wine during the last trimester. And speaking of being a party animal, I did have a baby shower here, but that’s unusual and considered very American. I think it was the first one for all of my guests, apart from the other American expats. But it was still low-key; a few friends hosted mine at one of their houses. We ate lasagne and decorated onesies (known as “baby grows” here), toasted with a bit of prosecco and they presented me with some sweet gifts. It was relaxed and just a great excuse to gather good friends together. Cards and gifts usually arrive after baby is born; I think there’s still a bit of an old-fashioned superstition behind this—that you shouldn’t celebrate until baby has arrived and is healthy.

Midwives do it all

One major difference with pregnancy healthcare in the UK versus the US is that here your care is led by a midwife. For your first pregnancy, you meet with a midwife much more often than with subsequent ones. The first appointment is called the “booking in” appointment and it’s the longest one. At this appointment you’re given your pregnancy folder, a bound pack of forms that you are charged with carrying around with you to every appointment and told in late pregnancy to have with you at all times in the event you go into labor. You’ll most likely see different midwives at your appointments, and you won’t know who will be at your bedside during labor until the time comes. Unless you have complications or are considered high risk, you won’t see a doctor at all, during your pregnancy or during childbirth. Luckily the majority of midwives I’ve encountered are knowledgeable with a caring demeanor.

At every appointment you have your blood pressure checked, but what you weigh seems unimportant. I never knew how much I gained during my first pregnancy, and you don’t hear women talking about specific pregnancy weight gain figures, and I think that’s a good thing.

Maternity leave for mums usually starts a week or two before the due date, and this is when all the last-minute prepping and pampering takes place, including a pregnancy massage, which is a popular treat. 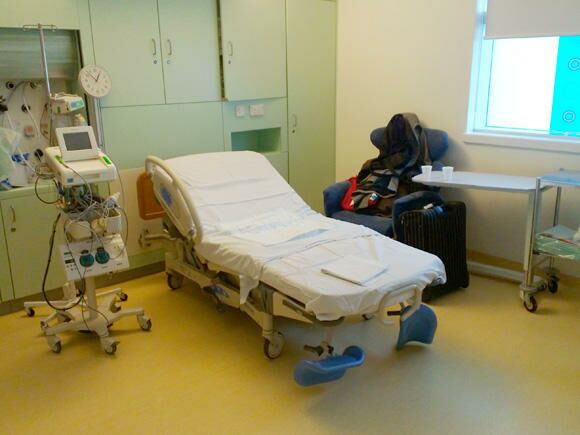 In and out: my birth story

I gave birth at a well-respected teaching hospital in central London, and was admitted to a room on the labor ward, where we met the first midwife. You’ll see several midwives if you’re there for more than a day as they change shift. You roll with it. If one really doesn’t rub you the right way you can ask to be assigned a different one; luckily we didn’t feel the need for that.

If you gave birth without drugs or intervention, you can be checked out a mere six hours after birth.

There’s been a lot of controversy here about women being pushed into having labor interventions they don’t want, including c-section deliveries. I never felt pressured into anything, and I felt confident signing the consent form for the c-section as the doctor explained things calmly to me and gave me a bit of time to think it over. Skin-on-skin contact is encouraged as soon as possible after birth, as is getting them on the boob. You’re returned to your room pretty quickly, where a midwife is able to help you get your newborn into position for that first breastfeed.

As long as there are no complications, you’re then moved to the postnatal ward, where you lose your privacy (unless you choose to book a private room, but these are snapped up quickly and cost upward of £250 a night). Here, bays are just big enough for a bed, a clear plastic bedside baby box and a chair—separated by curtains. Historically husbands were not allowed to stay overnight, but during my birth, they were testing a pilot program for the men to sleep in the chair.

We were discharged just more than 24 hours later. London maternity wards are often overcrowded, so they’re happy to send you on your way if everything looks okay. In fact, if you gave birth without drugs or intervention, you can be checked out a mere six hours after birth, but either way, a midwife will pay a house call to check on baby during your first full day at home.

Raising baby on your time

After having their first baby, most of my London friends ask that relatives—including their parents—wait a week before visiting so they have time to settle in to this crazy new life on their own. Most dads get two weeks paternity leave, so it’s nice for mum to have support once they’ve returned to work.

Maternity leave in the UK typically lasts up to a year. After about nine months the maternity payments stop but you are entitled to have your job held for a year after your maternity leave starts, so many take the additional time at home. This generous amount of maternity leave really gives you a proper chance to breastfeed and spend time with your baby. Breastfeeding is tough enough without having to worry about finding somewhere to pump at work three months after giving birth; a stressful scenario I know American friends have experienced. But many women here still turn to breastfeeding experts for help. There are free local support groups, in which you sit and breastfeed while a trained volunteer evaluates your technique and offers advice. Another option is hiring a private lactation consultant. I did this and found it worth the money, as they come to your home, it’s one-on-one and she offered follow up support via email which I took advantage of. 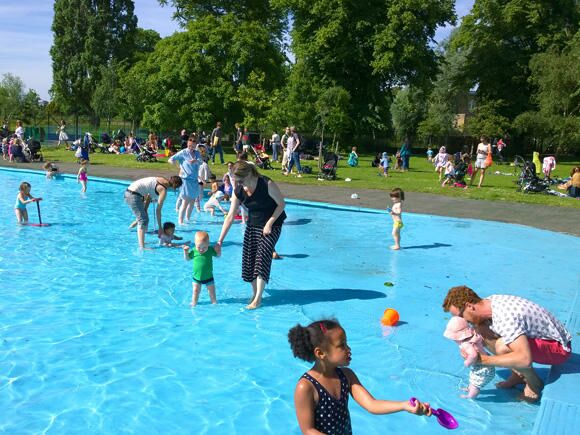 Where the little ones are

I still live in the same area I first moved to as an American expat, a middle-class liberal district in north London called Stoke Newington. It’s well known for being a family-friendly area, where pushchairs (aka strollers—most frequently, the Bugaboo Bee3) jockey for space on the pavement. For the most part, it has a village atmosphere with a mix of independent and chain shops that’s appealing to young career-oriented people.

We have an excellent park—Clissold Park—nearby with many areas to keep kids entertained that we frequent year-round, regardless of the (often dreary) London weather. It has a large playground, wading pool, tennis courts, ponds and cafe. The nearby Clissold Leisure Centre has a toddler pool and creche, which is a place for short-term childcare where parents can leave children under five for up to two hours. There’s also a soft play area covered in foam mats with bouncy obstacle course structures that holds free sessions several days a week, which is a great place to take crawlers and new walkers.

As you’d expect in an area popular with families, there are a lot of child care options—and often long waiting lists to join them. Your main choices are playgroups, child minders (a licensed care provider who looks after a few children in their home), nurseries, and nannies. Playgroups are generally for two- to four-year-olds, and run for a few hours every morning. They tend to be cheaper and more flexible than nurseries, which are for a minimum of two full days per week. Some mums place their kids on waiting lists for these places before giving birth. 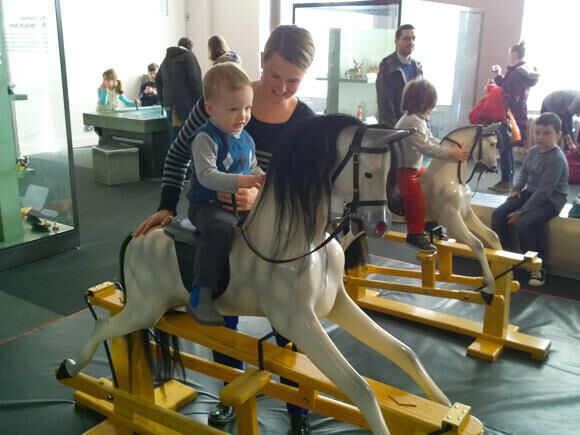 Winning London (with a toddler)

Nothing is as exciting as a “big red bus” to my son, which is a good thing, as that’s our main mode of public transportation for outings outside of our area. Perhaps not coincidentally then, his favorite museum is the London Transport Museum; it’s toddler heaven. Buses, trains, tube cars, taxis—they’re all here and accessible for kids to explore, and it’s incredibly hands-on. But this does mean he gets frustrated that he can’t touch everything in other museums! Other places he’s fond of include the Museum of Childhood, the Science Museum, the Royal Air Force Museum, ZSL London Zoo and its country-side based sister, ZSL Whipsnade Zoo, where the bigger animals are kept.

Will I ever move back to the US? I hope so, and we’ll be exploring that option after baby number two arrives and we settle into being a family of four. Although I love London, I’m eager to show our family around my side of the pond.