The Saturday Night Live legend dishes about breastfeeding two children and a few homeopathic tricks she's learned along the way. 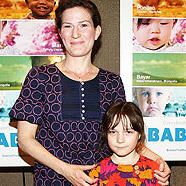 TB: What was breastfeeding like for you when you first started?

AG: I’m a person who has a very itinerated career — I move around, I travel, I don’t know when I’m going to work, I don’t know when I’ll be home. The easiest part of parenting, without a doubt, has been breastfeeding. The first few weeks are really tricky because you feel panicky and you don’t know what you’re doing, which is kind of a like a symbol for the whole experience of parenthood. Once you get it down, it makes things so much easier. By the time that your into your fifth or sixth week, it’s as easy as pie. Wherever you are, you’ve got a snack right there for that baby.

TB: Did you find breastfeeding a challenge in the beginning though?

AG: I think breastfeeding is hard. But I also think going to college is hard. It’s hard to get a mortgage. It’s hard to run six miles. I think it’s really hard to do a lot of the things we do. But people do it every day. People go on diets… they give up carbs. That is so much harder than breastfeeding! Do you know how hard it is not to eat croissants for six months of your life in order to get into a skinny pair of jeans?

AG: I have personally squirted breast milk on both my children’s asses to stop a diaper rash in its tracks. Literally, you stand there like a fire engine and squirt their little red butts. And the next time you change their diaper, it’s completely cured. I’ve also squirted breast milk up the nostrils of each of my children to help them feel better from a stuffy nose. They get better faster because their little immune systems get all of your antibodies and before you know it, they’re done fighting a cold before it’s over. Very handy.

TB: Breastfeeding in public is always a controversial topic. What are your thoughts on the issue?

AG: You might be around people who make you feel a little bit nervous about seeing a lady whip out her boobs in public. You know what I say to them? “Keep the eyes on the forehead.” It gives them a focal point. They know they have a place to look. They’re aware that I’m aware that they’re scared I’m breastfeeding. The only way more women will feel more comfortable about breastfeeding in public is if more women do it. Don’t worry about what people think. You’re allowed to do it.

TB: Now pumping is another story. How do you feel about that?

AG: A good friend of mine once defined first seeing his wife pumping as a weird combination between Barbarella and a farm, which is one of the best descriptions of it I’ve heard. It’s really, really, profoundly bummer-ish. But it is satisfying afterwards when you can look at that bottle and visualize an evening out with your husband.