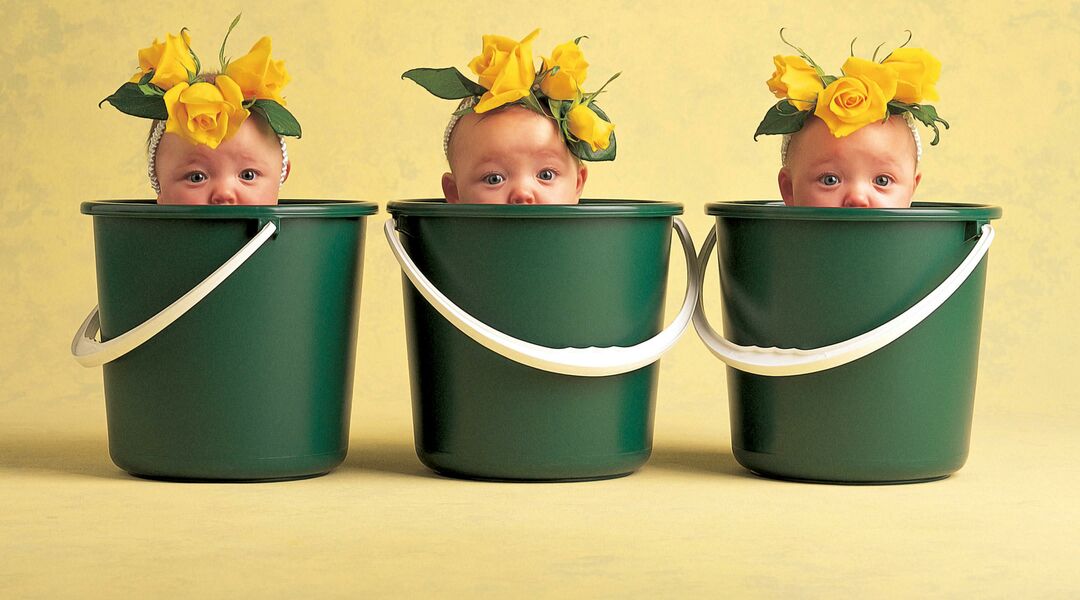 Before Instagram, there was Anne Geddes, the Australian-born photographer whose nature-inspired baby photos defined ‘90s baby photography. Remember those irresistible babies dressed as tulips? How about the sweet newborns sleeping on a bed of swans? These and other iconic photos spanning 30 years can all be found in Geddes’s latest book, Anne Geddes: Small World, a retrospective of her prolific career. Her photographs have also inspired a new line of baby-safe nursery paint(natch).

While Geddes continues to photograph her favorite subject—yep, babies—the adorable subjects of her fantastical photography have grown up (to become Olympic athletes, backup dancers for J.Lo and more) and kept in touch with the baby whisperer. Keep scrolling to see the amazing then and now photos of Geddes’s baby muses.

“What I love is the absolute simplicity and the delicate detail of Aimee’s brand-new baby hair,” Geddes says. What you can’t tell from the photo? Geddes’s studio manager, who held Aimee on her lap underneath a white cloth, had a “big wet patch” on her jeans. Because babies like Aimee keep it real.

Today Aimee works as a caregiver in a New Zealand nursing home. She’s studying nursing and hopes to focus on pediatrics, a career Geddes says she would pursue if she wasn’t a photographer.

These identical triplets sat in green buckets for this image that Geddes calls “Pool Party.” Their faces and expressions were so similar that people assumed she’d taken the same photo three times, Geddes says. Even their mother admitted she had trouble telling them apart!

Fast forward 22 years and the girls still match. They all received commerce degrees from the University of Wellington in New Zealand, and are headed stateside to Walt Disney World for a cultural exchange program.

At 7 months old, Christopher was one of five babies who posed in vases—and the only boy. Even so, “he rocked that hat,” Geddes says.

These tiny triplets looked like “sleeping dolls,” Geddes says. And even more so resting in “the large, craggy and very gentle hands” of a man named Jack. “I always know an image is going to be magical when my hands start shaking as I’m trying to focus,” Geddes says, “and it’s no mean feat to get 3 babies asleep at the same time.”

No surprise, now a statuesque 5 feet, 10 inches, the photogenic trio (Susanna, Jaclyn and Charlie) is signed to a modeling agency in Wellington, New Zealand.

Geddes photographed these 8-month-old twins in a slipper orchid for her book, Down In the Garden. They had “the cutest eyebrows for little babies,” Geddes says.

Photo: Courtesy of Brooke and Starcia

Twenty-plus years later, Brooke and Starcia’s eyebrows are still on point. Even cooler, the twins, who’ve danced for Jennifer Lopez and opened for Ciara, now work in the entertainment industry under the alias @theoneilltwins.

At two weeks old, Zac struck a pose—the one hand on belly, other hand on head look—all on his own for Geddes’s 1998 calendar because he’s a natural.

Today, Zac works at a Melbourne, Australia, restaurant and models on the side. And because Zac is such a fierce poser, he has his very own stuffed toy modeled after him that he calls his “action figure.”

Twin preemies Mitchell and Taylor were so tiny, they made the perfect field mice to nestle in a pair of size 22 boots for Geddes’s book, Down In the Garden.

Photo: Courtesy of Mitchell and Taylor

They certainly wouldn’t fit into a pair of size-22 boots these days. Standing at 6 feet, 3 inches, the twins have collected eight state titles and three national titles playing football for the Nevada Spartans.

“I remember the day of this shoot very clearly—how cute the chubby little 6 month old looked in her gorgeous costume,” Geddes says of Tyla’s bird bath-themed shoot for Down in the Garden.

Tyla has “truly flown the nest—or the bird bath to more precise,” Geddes jokes. At 22, she represented the New Zealand rugby team at the 2016 Summer Olympics in Rio de Janeiro.

The 16 Best Baby Memory Books for Marking All Their Milestones