To heck with the actual TV show! Here are the ads that gave us the mom-feels this past year. 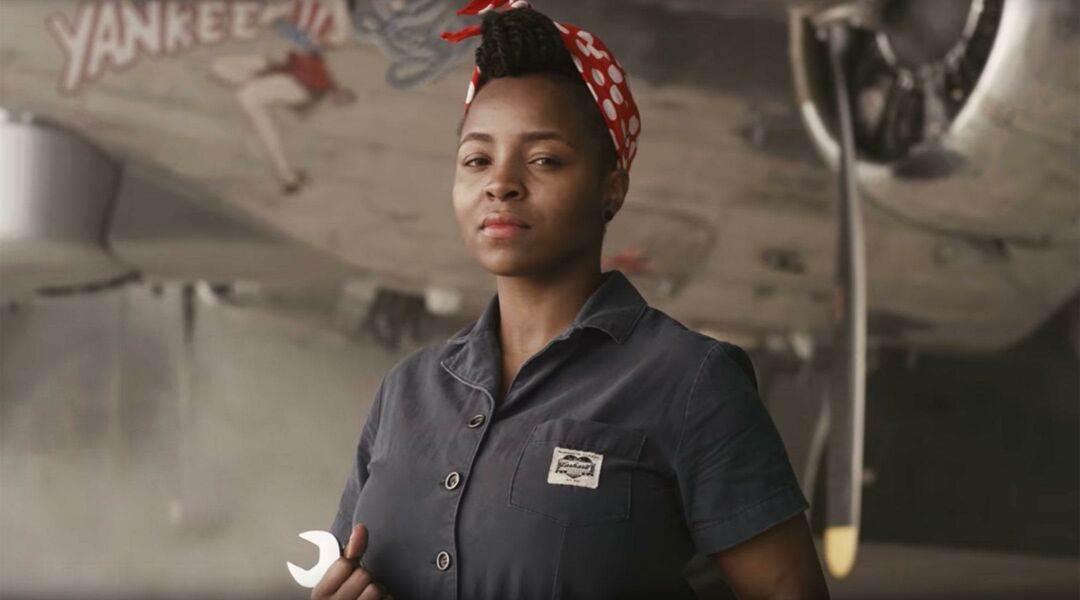 The main objective of any television commercial is to get you to buy (or buy into) something, but sometimes that 60-second spot does a little more. We took our thumbs off the fast-forward button long enough to laugh, cry and admire some of the very best advertisements geared toward moms this past year. Instead of running to the bathroom or grabbing a snack during these commercial breaks, we invite you to stay tuned and enjoy.

Mom as a Verb

This year, Yoplait took on mom shaming with this totally relatable ad, featuring a bunch of mothers doing their thing like breastfeeding in public, rocking yoga pants, bribing kids to do chores—and giving zero plucks about what others think. In the end, Yoplait admits that their yogurt is not made with cage-free organic Norwegian hemp milk—but who cares, because the kiddos love it. Hear! Hear!

Tears come early and often in this beautiful #LoveOverBias Procter & Gamble ad for the Winter Olympics. Here, we listen to “O-o-h child, things are gonna get easier” play as a young African-American skier excitedly bounces on her bed, surrounded by posters of only white skiers. Throughout the commercial, we see a gay figure skater, a Muslim speed skater, a female Korean hockey player and others who face bias all with their moms close by, encouraging them. The ad ends by asking, “Imagine if the world could see what a mom does,” as we watch the little girl who bounced on her bed kick serious butt as an adult in the Olympics. She and her mom sob. And so do we.

We !&@-ing love this clever Kraft Macaroni & Cheese campaign featuring Melissa Mohr, PhD, author of _Holy Sht: A Brief History of Swearing_. The ad starts out by informing us that, based on a survey, 74 percent of moms drop f-bombs in front of the kids. Mohr then spends almost the rest of the ad offering nonexplicit alternatives to swears words (“Get off your monkey-flunking tablet and get your shiitake mushrooms ready for soccer practice!” is a personal favorite). But alas, several curses slide right out when she steps on rando toys and burns herself preparing a lunch of—you guessed it—mac and cheese. Flippin’ hilarious!

Dove launched a new baby skin-care line this year and with it, their #RealMoms ad campaign. The thing is, the commercial never shows a single bar of soap or baby moisturizer. Instead, we see several moms who are each raising their child in their own way, such as a transgender mother and her wife who find themselves constantly explaining that, yes, they’re both their kiddo’s mom. The spot is peppered with several reassuring lines that, truly, all moms need to hear, like, “Do what fits your family” and “There are so many ways to be a mom.” And it’s all done sans the cheese factor. Love.

A Child’s View of Mom

To small kids, moms look like giants—and that perspective is perfectly illustrated in this Brawny paper towel ad in which children literally filmed the entire commercial themselves. Each kid was outfitted with a pair of Spectacles, Snapchat-enabled sunglasses, and they recorded virtually all the happenings in their actual homes over two days. The result: an adorable collection of moms thwarting accidents, mending boo-boos, cleaning up messes and, you know, just being awesome.

A Shout-Out to Would-Be Moms

This American Greetings ad does more than remind us that receiving a card is always better than getting a text. It gracefully illustrates that, “in the right moment, [a card] can mean everything.” We watch a couple struggling with infertility: visiting the doctor, discarding negative home-pregnancy tests and smiling despite sadness at a friend’s baby shower. In the end, the woman at the center of the ad receives a card from a friend that reads “I can’t know what you’re feeling…But I’m here for you.” A truly beautiful reminder that we’re not alone—and that it’s actually really easy to let another person know that.

The National Partnership for Women & Families holds no punches with this PSA about paid family leave. It features Lauren, who’s married, has a good job and is 260 weeks, five days and nine hours pregnant—”not that she’s counting.” She’s comically giant and holding that child in because, quite simply, she can’t afford to take time off from work to have her baby. Neither Lauren nor her husband have paid family leave, so they’re accruing vacation and sick days until their child-to-be turns 6. It’s seemingly absurd but, sadly, spot-on.

In this cheeky Plum Organics ad all about sex, a plucky woman strides through bedroom after bedroom of tired parents who are too pooped to get it on. “Did you guys know that you could totally be having sex right now?” she asks an unenthusiastic pair, each staring at their own digital device. The point of the ad: Having more sex leads to stronger relationships, which leads to happy moms and dads and kids. And, more sex means more babies, which, means more baby food, natch. Meanwhile, we’re totally eating up the fact that the spot features an interracial couple, a gay couple and an interracial gay couple.

“Today in school, we learned about Rosie the Riveter,” a child says over images of women fixing airplanes and cars; digging in the dirt and wielding chainsaws, in this ad from famed workwear brand Carhartt. “My teacher said she could build or fix anything. They said she could take on the world. She reminds me of you, Mom.” Heart. Swells.

Nothing touches a mom’s heart quite like witnessing a birth. In this black-and-white ad from The Honest Company, we watch several real moms-to-be laboring at home or in the hospital, all surrounded by love and joy as the gorgeous original score from will.i.am slowly builds around them. The ad—which features no products—closes with a montage of ecstatic and awed moms meeting their just-born babies. Gets us every time.

If you think a car commercial can’t give you all the feels, you’re wrong. In this Volvo spot, we meet a little girl on the morning of her first day of school. She’s nervous. But through the entirety of the ad, we hear her and her mom talk about how she’s going to make friends that’ll last a lifetime. The pair chat about her exciting future, and we watch the girl’s life unfold—birthday parties, boys, adventures around the world—spliced with images of her walking to school that day. As the music swells and she gets to a crosswalk, a woman nearly hits her with her car. The words “Sometimes the moments that never happen matter the most” then appear on the screen. And no, we’re not crying; we’ve just got something in our eye.

This dialog-free spot from the tech brand HP doesn’t need any conversation. Instead, we watch a couple move from pregnancy to parenthood through precious photographs printed at home. All the while, the Tom Rosenthal song “Woes” plays and—my goodness—we dare you not to run out and get a printer after you hear his lovely voice sing “It all comes and goes, it all comes and goes.” It does. It does.