You made it through babyhood, so you thought you were in the clear — but toddlerhood sure can be nervewracking too! Here's how to deal with some of the tough stuff. 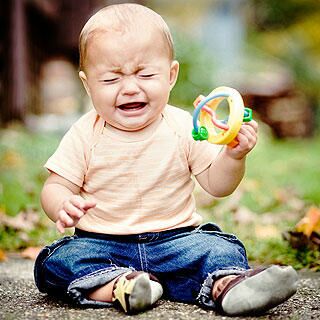 saying “no”
You probably already know that toddlers are pretty active (read: They get into everything), so you may be saying “no,” but what you might not realize is that “no” could be one of your baby’s first words. Don’t worry; that’s normal. A toddler is developing his sense of independence and is testing to see what limits you give him.

TIP Resist the urge to be really stern. If your toddler is saying no to picking up his toys, say, nicely, “It’s time to pick up your toys.” If he still resists, acknowledge how he probably feels by saying something like, “It’s hard to stop when you want to play more.” Then take his hand and help him pick them up. At this age, discipline is tough to enforce, but kindness and empathy can go a long way.

parallel play
You might be looking forward to making playdates during toddlerhood, but know that your toddler probably won’t be able to really grasp the concept of sharing or playing cooperatively with another child until he’s around age three or four.

TIP If you have a one- to two-year-old, make the playdate, but don’t push the kids
to play together. Let them do “parallel” play, which means they’ll play alongside each other, with limited interaction. If you’re worried about them fighting over toys, bring two of everything. And start encouraging sharing around age two and a half.

making transitions
Toddlerhood is full of tough transitions, like giving up the pacifier or moving to a toddler bed, and toddlers aren’t very good at making them. In fact, even day-to-day transitions like going from watching a video to taking a bath can be tough to get a toddler to accept.

TIP Give your toddler a warning. Say something like, ”In five minutes, we’re going to say, ‘Bye-bye, video. Hello, bath.’” And in five minutes—you guessed it—say, “Bye-bye, video,” as you turn off the TV and then gently lead him into the bathroom and say, “Hello, bath.” For a bigger transition (like the bed), give several preview warnings over a few days or weeks. Try to make the change feel positive and exciting.

temper tantrums
Toddlers are known for their tantrums, most likely because they’re still figuring out how to communicate and they’re doing all that boundary testing. Don’t let a tantrum catch you off guard—they should totally be expected at this age, so don’t freak out.

TIP Let your toddler calm down with you there—maybe even hug or hold him so he feels safer. It’s not a good idea to do time-outs until age four, because forced alone time could make a younger kid feel abandoned. Your toddler’s still very focused on his attachment to you.

The Bump expert: Dr. Fran Walfish, child and family therapist and author of The Self-Aware Parent: Resolving Conflict and Building a Better Bond with Your Child

How to Tame a Tantrum