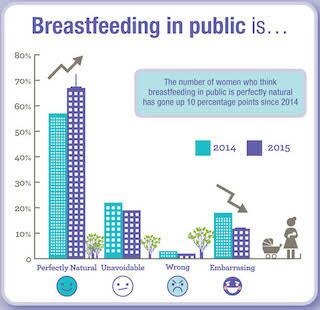 Knowing that breastfeeding is best for baby is the easy part, but actually doing it exclusively for baby’s first six months of life (the recommended time by the World Health Organization and the American Academy of Pediatrics)? Well, that’s the tougher part for moms—for lots of reasons. The good news? Moms have universally come a long way in recognizing the many benefits of breastfeeding, according to Lansinoh’s annual survey on the topic. The not so good news: moms are still facing challenges to breastfeeding, including prejudice or criticism for nursing in public.

For more about how breastfeeding is viewed around the world, click here.

The Bump #Boobolution Day is August 7! Support breastfeeding moms by sharing our pledge. Because baby’s gotta eat whenever and wherever hunger strikes. Molly Sims, Tiffani Thiessen, Rosie Pope and Mayim Bialik have all supported. What are you waiting for?