The fertility expert and Desperate Housewives actress dishes about breastfeeding while on Seinfeld and why her mother's experience breastfeeding convinced her she would do the same. 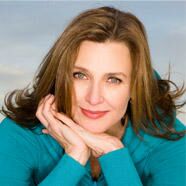 TB: What led you to the decision to breastfeed?

BS: I had heard a story from my mom when I was a young girl. My mother had six children. And her first experience having my older sister was so radically different from her experience having the rest of us. She would tell us this story about when she was a young mother — 20 years old — and she went to the hospital to have my sister. They basically put her under, took the baby out by forceps, and then wrapped her breasts so that her milk wouldn’t come in. When she came to, she had a baby, she had completely missed the whole experience — hadn’t felt anything really — and her breasts were wrapped. When she said, “Why are my breasts wrapped?” They told her, “Oh, so your milk won’t come in.” And she said, “But I want to nurse.” And they said, “Oh but it’s so much better this way.” That’s when she said, “No, I am nursing this child; you take these bandages off of me.”

After that, she became an advocate for breastfeeding — in 1948. And I remember hearing that story and having it stick with me. So when I knew I was going to have my son, I knew I wanted to breastfeed. She said it was one of the most satisfying things for her to feel that connection — to bring that child into the world and then be able to sustain it with your own body. Later on I researched so many interesting things about it. For instance, when a baby latches on to the nipple their saliva actually tells the areola — like a computer in the body that can register what is in that saliva — to produce the milk that will specifically balance the child’s need and their immune system. The body is so intelligent. And for us to think we know better is kind of insulting to nature. So I knew I wanted to breastfeed.

TB: Have any funny breastfeeding stories?

BS: Yes! I was on Seinfeld actually while I wasbreastfeeding my son — I got to play “The Bra-less Wonder” [Sue EllenMischke] and I actually said to Larry David beforehand, “What sizewould you like?” because if I nursed more, my breasts got bigger and if Inursed less they got smaller!

The irony is after I did the first episode, my breasts changed their size. I did four episodes as “The Bra-less Wonder,” but bythe last episode, I had weaned him down to night feedings only — so my breasts had actually shrunk down three sizes! Everyone was like, thisis so strange! In Hollywood, women’s breasts usually get bigger, notsmaller!

TB: Was breastfeeding hard at first for you?

BS: Well it was not easy. And it’s extremely uncomfortable at first. And it certainly got more challenging as time wore on because then teeth come in. It does really interrupt your sleep too. But I think it was really one of the things that helped me get my body back since it really helps shrink the uterus and helps you drop the baby weight.

But yes, when I started it was really difficult. My milk coming in was actually, in some respects, more difficult than labor because it was so painful. And one breast was more dominant than the other so they became different sizes at first. My son also wouldn’t latch on easily on the right side, but then the left side he was really going to town on! One tip I got though that worked was about warming the breast up and then cooling it down — that saved my life. I would take a warm diaper and lay it on my breast before I nursed. And then he would latch on. And then after I nursed I would take a frozen bag of peas and put it on my breast to close the nipple and to make it stop leaking. It was just an old wives’ tale I heard that actually really worked for me.

TB: How long did it take for breastfeeding to finally feel like it all “clicked”?

BS: It took me about four weeks. Everyone who told me stories about giving birth said as soon as the baby comes out, they nurse. So I had this kind of romantic vision of my baby coming out and nursing immediately. But in the end, he was placed on my chest and I wanted to nurse him, but he was barely breathing! The doctor said, “I don’t think he’s the hungriest person in the world right now. You can just save that for later…” That was funny.

TB: Did you have a “goal” time for how long you would breastfeed? Or did you aim to wean your baby naturally?

BS: Well if I had set out to breastfeed my baby until he naturally wanted to wean himself, it probably would have been in like, first grade! [Laughs.] He loved it. Of course when I finally weaned him at two he became a thumb-sucker. He was definitely one of those kids who just took to it. I didn’t have any set time, no, but I knew that I wanted to do it for at least six months — since I knew about all of the health benefits there were for him and for his immune system. And then of course it became such a part of my lifestyle, and it was such an amazing bonding time for us. So I was willing to compromise my schedule and be available to him all of the time. But when I wasn’t — well thank God there were pumps! All in all, it was really a great experience for me.

TB: What was the most random place you ever breastfed or pumped?

BS: This is hysterical — I was in the middle of teaching a yoga class. Actually, in the middle of demonstrating Warrior Two, and the baby was crying from the other room. And I literally started nursing in the middle of teaching a yoga class – though, of course, it was a one-handed Warrior Two! But yes, that was the most random place I’ve ever breastfed. And probably the most bizarre thing I think these people had ever seen! But after a while they became used to me bringing him to class. (Not that I made it a normal thing!)

TB: What’s your biggest piece of advice for any mom who is either about to start breastfeeding or is breastfeeding now and having problems?

BS: There are so many great lactation specialists out there — don’t give up. Seek help. There are so many ways to make it easy for yourself. If one thing doesn’t work, something else will. And just know that the benefit for the health of your child — and for you — in that bonding far outweighs any of the discomfort.