Your Kids Are Different Because You Compare Them, Study Finds 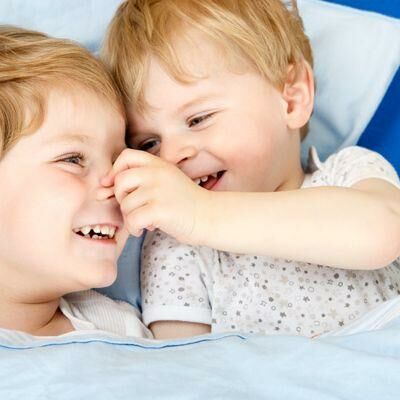 Is one of your kids brighter? Shyer? More outgoing? A new study says your perception of these differences exacerbates them.

Focusing on academic achievement of siblings, research from Brigham Young University found that “parents’ beliefs about their children, not just their actual parenting, may influence who their children become,” says Alex Jensen, lead author of the study, published in the Journal of Family Psychology.

For example, the majority of the parents of the 388 teenage first- and second-born siblings involved in the study said their firstborn did better in school. But on average, both kids earned similar grades.

“A mom or dad may think that oldest sibling is smarter because at any given time they are doing more complicated subjects in school,” says Jensen. 'The firstborn likely learned to read first, to write first, and that places the thought in the parent’s mind that they are more capable, but when the siblings are teenagers it leads to the siblings becoming more different. Ultimately, the sibling who is seen as less smart will tend to do worse in comparison to their sibling."

These often misinformed beliefs have real implications: The child who parents believed to be smarter tended to do better in the future, while the other child had a slightly lower academic performance the next year, resulting in a 0.21 GPA difference among siblings.

“That may not sound like much, but over time those small effects have the potential to turn into siblings who are quite different from one another,” says Jensen.

There is an exception, though: when the firstborn is a son and the second is a daughter.

“Parents also tend to think their daughters are more academically competent than their sons, and at least in terms of grades that seems to be true,” says Jensen.

So how do you combat this parent bias?

“It’s hard for parents to not notice or think about differences between their children, it’s only natural,” Jensen says. “But to help all children succeed, parents should focus on recognizing the strengths of each of their children and be careful about vocally making comparisons in front of them.”