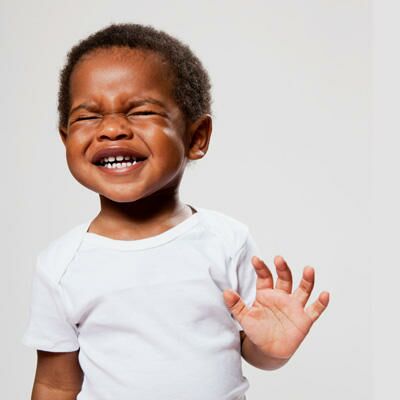 Get out the marshmallows and bags of candy, set up a campfire, and gather 'round! Halloween is tomorrow, and nothing gets us in the Halloween spirit like a good creepy story…specifically, hilariously spooky things kids say. Bumpies are celebrating the holiday by sharing some of the freakiest things their toddlers have surprised them with, so read on… if you dare! (Cue the scary movie sountrack!)

Who’s that on the baby monitor?

“While I was in my bathroom, I heard a male voice similar to my husband’s sing-song softly (but distinctly audible) the pet name we have for our daughter. Now, this pet name was only used at home by me and my husband. My parents and mother-in-law know it as well but live half the country away. No one else knew the name or called her by it. My daughter woke up in absolute hysterics and I bolted to her room, expecting to see my husband looking sheepish at her door after trying to say goodnight to her. Instead, I almost ran into him as he was coming in through our patio doors. Truly freaked out now, I reached my daughter’s room. She was the only one there. Since that night, my husband and I have both heard a male voice mumbling on the monitor. The creepiest thing is now my daughter is verbal and we hear her whispering back to the voice. When asked about it, she has told me it’s her friend. That’s about all she will say about it.”

“We went to my parents’ house one night and the dogs all of a sudden started going nuts barking and jumping at the front window. I was like, ‘I wonder what’s out there,’ and my daughter said, ‘There’s a guy out there.’ So, we all are looking and looking and there’s nothing her and the dogs are all staring. My husband and father both went outside — and saw nothing. My daughter said, ‘No there’s a guy right there with Pop Pop’s hair and he’s sleeping. He’s right there…’ And she described him and what he was wearing everything. A couple hours later we go outside get in the car and go to leave and she looks out the window and says ‘Bye, guy.’”

Mommy’s skin is so pretty!

"A funny/creepy thing my daughter said once was that she loved my skin. She came right up to me out of the blue, strokes my cheek, and whispered, ‘Your skin is pretty, Mommy. Can I wear it?’

“‘We were at Walmart when my oldest daughter was around 3. She kept looking up at the vents and duct-work. I asked her what she was looking at, and she said, ‘That man.’ I almost lost it.’”

“I heard an unfamiliar man’s voice on the monitor in my son’s room. I ran as fast as I could to get to him. He was just playing with a talking car toy!”