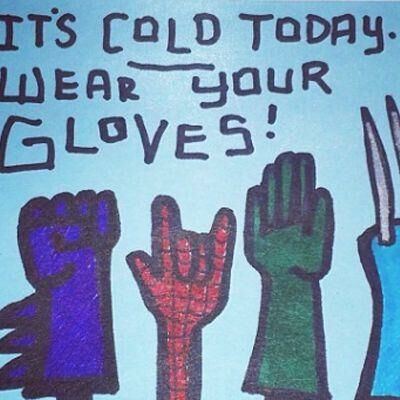 Even if a sticky note with “Have a great day!” made its way into your lunchbox as a kid, get ready to feel incredibly inadequate.

Brent Almond kicked off his son’s first day of preschool by slipping a Post-it note in his lunchbox, complete with a cartoon of Batman saying “Go get 'em, Jon!” And nearly two years later, Jon’s received an illustrated note in his lunchbox every single school day.

“I wanted to send a little bit of myself with him — probably more for my sake than for his,” Almond admitted to BuzzFeed, explaining the notes were only supposed to last through Jon’s first week of school.

The project escalated into 19 months worth of cartoons, usually superheroes, but sometimes including Disney or other characters. Once in a while, Jon makes special requests.

“I always oblige those requests, because they’re usually pretty funny,” Almond says. “One example was he wanted Godzilla saying ‘Have a ROAR day!’ It doesn’t really make sense, but it was awesome to see him trying to make a pun like his corny daddy!”

Spoiler alert: Almond is a professional illustrator, and the brains behind  DesignerDaddy.com.

See all of the Super Lunch Notes on Almond’s Instagram.