How Dads Are Supporting Breastfeeding Awareness

These guys may not be able to breastfeed, but they’re doing their part to support all nursing moms. 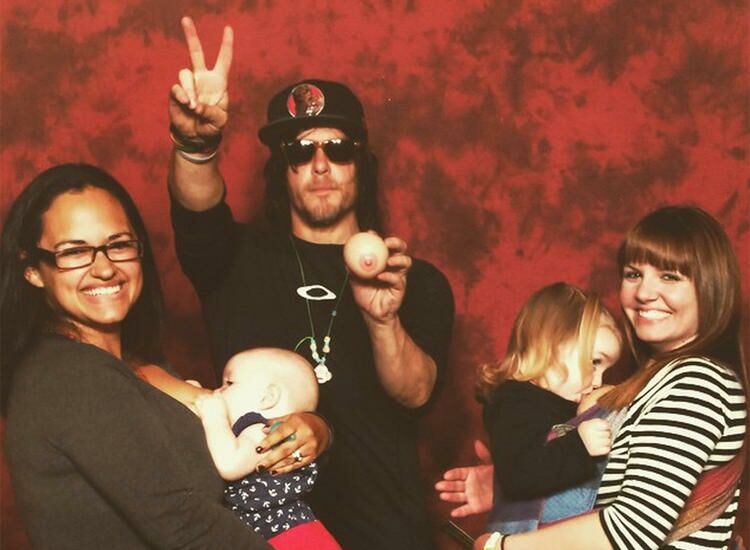 Eating an entire meal undercover isn’t easy or particularly enjoyable—just ask dad Brock Smith, who tried it after watching his wife struggle with getting their baby daughter to latch under a nursing cover. And he posted a video of his empathy experiment on Facebook to spread the word. “The anxiety with nursing in public with our first child, Elliot, now 3, was so real that [my wife] hardly ever left the house,” Smith told People. "This second time around, I’ve made it my mission to make her feel as comfortable as possible in every situation.”

Sometimes hip-hop artists get a bad rap for leading a party lifestyle. But rapper George Moss, a new dad, managed to break a stereotype and support his breastfeeding wife with one powerful Instagram image. “If you ever wonder what ‪#‎rappers‬ do when they get off stage, they clean breast pumps for their wives so their baby can eat. ‪#‎thuglife‬,” he wrote. After the photo received 40,000 likes and hundreds of comments, the musician said he was “sincerely blown away that more guys don’t support their women and children with breastfeeding,” tagging NormalizeBreastfeeding.org and Elevate Dads in his post.

Support for breastfeeding can be found in the oddest of places—like, say, a horror convention. An unlikely conversation about “boobs and babies” at Cincinnati’s HorrorHound weekend led to this awesome photo op: The Walking Dead star Norman Reedus posing alongside two TWD fans breastfeeding their babies. The pro-breastfeeding dad (he has a 16-year-old son with his ex Helena Christensen) happily posted the image on Instagram, captioning it, “Free it! Love these ladies!”

When model Tess Holliday faced social media criticism for posting a photo nursing her newborn, her husband Nick took to Instagram to defend her. “She actually looks really sexy here—but it isn’t always like that,” he wrote. “Sometimes it’s stressful and messy and nothing goes how you want it to. But sometimes it’s bliss.” He went on to defend a woman’s choice to breastfeed—and was quick to point out that the act itself isn’t sexual. “Finding a plus-size mother (two groups robbed of all sexuality) with whom I am in a relationship ‘sexy’ for being a good mum is not the same as objectifying strangers body parts in public,” he added.

From his petition to have changing tables in men’s public restrooms to his willingness to handle daughter Wyatt’s “projectile pooping,” Ashton Kutcher continues to show he’s a stand-up dad and husband to Mila Kunis, who’s been on the receiving end of public nursing shaming. So it’s no surprise that as a guest investor on Shark Tank, Kutcher offered up $100,000 to help fund the Beebo, a hands-free bottle holder/breastfeeding simulation device. And if he’s lucky, the product will be ready to ship just in time for baby no. 2.

Like Brock Smith, One Good Dad blogger Jason Greene is adding another refreshing male voice to the idea that baby doesn’t necessarily have to be tucked away under a blanket while being fed. To make his point, Greene had his children eat cereal under towels. “I made [them] eat their lunch under a blanket just like the old days of when they were infants. It turns out it isn’t the ideal way to eat. Who knew?” he joked.

Dads Who Get the Picture

Knowledge is power—just ask photographer Hector Cruz, who was turned away from breastfeeding classes with his wife. “I started to educate myself in every way I knew possible and really began to see the importance of breastfeeding,” he wrote on his website. “My wife’s breasts went from being a sexual object to something far more beautiful; her breasts became a natural extension of herself to give my daughter the life-sustaining nutrients that she needed.” The result of his new education? A photo series called Project Breastfeeding, featuring powerful images of men simulating nursing to destigmatize public breastfeeding, educate men and empower women—all things we can get on board with.

Necessity Is the Mother of Invention

Stay-at-home dad Chris Allen struggled to get a handle on his daughter’s feeding schedule when his wife returned to work. During one particular restless mealtime Allen had the ingenious idea to cut a hole in his shirt and stick the bottle in it. “That was the most comfortable I’ve ever seen my baby in a feeding with me,” he told the Today show. The dad then captured his attempt in a video, which has been viewed more than six million times and counting.