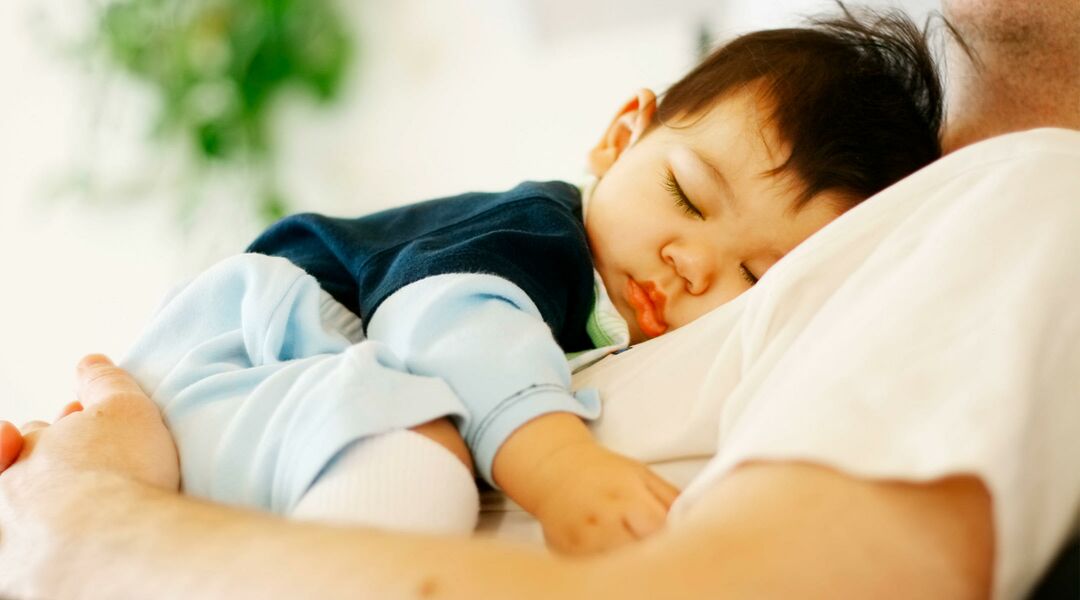 No amount of likes is worth putting your baby at risk.

Dr. Sam Hanke fell asleep on the couch with his 4-week-old son Charlie and woke up, hours later, to find his child dead. It was April of 2010 and the pediatric cardiologist and his wife Maura, a kindergarten teacher, were both overjoyed to have a healthy kid, who had come into the world without drama and, occasional fussiness aside, been a normal baby boy. Hanke fell asleep with his son hoping to give his wife, who had been breastfeeding, a rest.

“I just sat down on the couch to watch some TV and he was kind of sitting on my chest. We were just hanging out and I nodded off,” Hanke remembers. “A couple hours later I woke up and Charlie was gone.”
Charlie fell victim to Sudden Infant Death Syndrome, a diagnosis included in Sudden Unexpected Infant Death Syndrome, next to his sleeping father. The idyllic image of the dad sleeping with his kid on his chest, turned tragic. Sadly, the Hanke story—horrible and personal as it may be—is not unique. It turns out that image of the tired dad and the placid child, which has become so popular on Instagram and other social media sites, depicts very real danger. Of the 4,000 babies that die of SUIDS annually, a significant number die on couches or in armchairs. Many perish near dad or under him from due to suffocation. Emergency Room doctors and pediatricians see those tragedies regularly.

“As a father, the only thing you want to do is have a healthy baby and help out” acknowledges Dr. Lori Feldman-Winter, co-author of the American Academy of Pediatrics safe sleep recommendations. But a good impulse can lead to terrible results, especially in the living room. Dads who fall asleep on the couch or in a chair while trying to take care of a child risk having that child roll off of them or out of their arms. Cushions don’t soften the hard data: That’s a terrible prospect. Sleeping on a couch or sofa increases the likelihood of SUIDS 67-fold and deaths on couches accounted for nearly 13 percent of sleep-related infant deaths last year. Children get caught between adult bodies and forgiving cushions or get stuck in loose fabrics and suffocate.

Now, parents may well be exacerbating an already troubling situation by sharing photos of dads blissing-out on couches and in chairs with their kids. It’s a naturally appealing image that speaks to both the strain and joy of parenthood, but what makes it such a popular tableau? Shontavia Jackson Johnson, memetic theorist and Director of the Intellectual Property Law Center at Drake University, says the appeal of the image comes down to two things: the draw of babies and the novelty of a distinct fathering moment.

“Images of babies make us smile,” Johnson explains. “They represent the best of humanity.” In fact, in terms of internet memes, Shontavia says babies rate just below cats. For proof, she points to the continued circulation of a meme called “success kid” which has been around for nearly a decade. The dad-and-baby image is even more powerful than that because of the implied connection. Positive images of fatherhood in the media are actually pretty rare when compared to images of motherhood, which Johnson believes makes images of cuddling dads well suited to platforms that encourage likes and shares.

And loved it is. You can find the image shared by new parents and reposted by friends on nearly every photo-based social media platform. It’s pinned, ‘Grammed and Facebooked across the internet. Unsafe sleep images by dads like Alec Baldwin and Jimmy Kimmel have been liked by thousands. And it’s also standard stock-photo fodder. Getty Images is full of pictures of dozing couch dads. Without malice or an understanding of the real threat they represent, Fatherly has posted dozens of these pictures.

“Images of dads being nurturing are not common. Seeing those types of images warms our hearts. That leads to sharing,”Johnson explains. “It’s all the stuff we love.”

Fighting a meme is incredibly difficult and Johnson doesn’t believe that the images in question can be purged through online confrontation because the conversation is likely to devolve into a debate on co-sleeping in general, which does have advocates despite specific AAP recommendations. The issue at hand is more specific than that. It is about couches and chairs and there’s no legitimate debate to be had.
Johnson recommends making a conscious effort not to like the images and to encourage others to abstain from the upvote as well. “To the extent those types of images are no longer socially acceptable, the social media market will dictate what happens,” she says.

Making those images socially unacceptable has also become part of Sam Hanke’s work. A year after Charlie’s death, he and his wife began Charlie’s Kids as a way to memorialize their son. The organization’s mission is to educate and support parents in making safe-sleep choices: putting a baby to sleep on their back, on a firm safe sleep surface, in a crib or pack-and-play without blankets, bumpers or pillows. They support this mission through the distribution of a baby board book Sleep Baby, Safe and Snug, which reminds parents about safe sleep practices in the guise of a bedtime story.

But Hanke is struggling to help others avoid tragedy. He says dangerous sleep images have become part of parenting traditions. “Even in our own hospitals it’s something that we struggle with,” He says. “There’s certainly a norm to these images that is subtly saying that these types of behaviors are safe and okay.”

He acknowledges that people may believe that because of how many fathers seem to be sleeping with their kids on couches without consequence. That’s understandable, basic psychology. It presents a similar aesthetic problem to the one seat belt advocates confronted in the late 1960s. Driving looked a specific way. It did not involve a harness. It was aspirational and clean, the embodiment of a desire for freedom. And most people didn’t die. But many of the ones that did died unnecessarily and so there was a cultural referendum and a political and cultural decision to do better.

The state will never police parental sleep habits, but the culture around couch time can change. Hanke insists that it must–and soon. He lost his child. He will not stand idly by and let other people experience his pain. He hopes to educate people. He hopes to stop all those dangerous shares. But he hopes that the issue will soon be regarded the same as seatbelts and car seats. After all, many kids once got from point A to point B without dying, but many didn’t. He notes that people would likely be troubled by a picture of a car in motion with a kid hanging out the window. He hopes the image of the father and baby sleeping on a couch becomes just as unsettling.

“We hope that people will say, ‘Wow, that kid is in an unsafe sleep environment,’” Hanke says. “We hope that it’ll become more and more recognized.”

Baby Dies After 2-Year-Old Brother Climbs Into His Crib

These Are the Safest States to Live in the US, Survey Says

What Parents Need to Know About the New Drowning Prevention Guidelines

Your Household Cleaning Products May Be Linked to Childhood Obesity