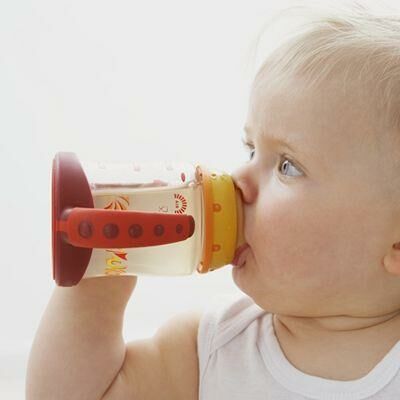 Step away from the sippy cup — and nobody ends up overweight.

At least, that’s what the latest recommendation from the American Academy of Pediatrics says. The AAP is now suggesting that parents wean baby off his bottle on his first birthday to prevent his chance of becoming overweight. Letting baby’s bottle linger also increases his chances of getting more cavities and ear infections. So, you’d think that the next best thing (if he can’t have his bottle), would be to turn to his sippy, right?

Wrong! The latest study, published in The Journal Pediatrics, found that switching from bottle to sippy won’t prevent baby from becoming overweight. Why? It’s less about the cup he’s using to take in all those liquids and more about how much he’s taking in and since a sippy’s really no different from a bottle (in terms of how much fluid they take in), researchers are warning moms and dads to steer clear of the sippy.

Researchers in New York followed more than 100 pairs of parents and their 12-month-old toddler for a year. Each tot was taking in more than two bottles of milk (or juice) each day as part of the study. Then, researchers divided up the toddler-parent pairs into two separate groups: One group was bottle-weaning and received sippys instead, and the other group received nothing.

They found that both groups were ditching the number of bottles they used a day, but the bottle-weaning group (who also had sippy cups), were leaning on the sippy’s more often. They reported that their kids were taking in just as much as they did when they had a bottle.

And using the sippy didn’t decrease their risk of being overweight. The researchers found that swapping bottle for sippy did nothing but changed the vehicle each kid was using — it did nothing to change how much liquid they were taking in.

To wrap it up, researchers suggested that parents wean baby off bottle and sippy anywhere between 15 and 18 months — and pay more attention to how much liquid their child is really taking in. When baby’s a year old, the researchers said, he should be getting most of his nutrition from solid foods, sans liquids.

Will you skip straight from bottle to kid-sized cup?

All the Reasons the Days Are Long but the Years Are Short
ADVERTISEMENT
ADVERTISEMENT
Article saved.Go to My Saved Articles
Article removed.
Name added. View Your List