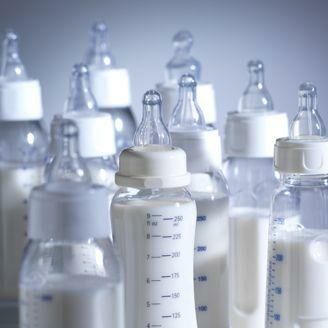 New research found that bottle feeding baby increases his risk for developing hypertrophic pyloric stenosis (HPS). HPS is a stomach obstruction that results in severe and frequent vomiting by baby. It’s most common in the first two months of an infant’s life.

The study, published in the JAMA Pediatrics, set out to identify whether or not bottle feeding during early infancy increases baby’s risk of HPS. Researchers led by Dr. Jarod P. McAteer from the Seattle Children’s Hospital and his team of colleagues set out by first looking at when HPS cases were at their lowest — which, coincidentally, was during the 1980s, when there was an upsurge in breastfeeding rates.

From there, they collected data from Washington State birth certificates and hospital discharge data between the years of 2003 and 2009, in what’s being called the largest analytical HPS study of its time. During the six-year time frame, researchers identified 714 singleton births as their “control” group; they did not suffer from HPS.

Though the study was entirely observational, they do make note that all of the data was provided when mom and baby were discharged from the hospital, which means that they did take into account babies who might have been initially breastfed after birth but then switched to formula feedings once mom was home. Babies who were switched from breast to bottle also had a greater likelihood of developing HPS.

At the same time, however, researchers did find that bottle-fed infants were more 19.5 percent likely to develop HPS than their breastfed peers. The likelihood of baby developing HPS was increased if the baby was a boy; the odds also surged upward if mom was 35 years (or older), and if she’d already given birth once before.

In their conclusion, researchers write: “These data suggest that bottle feeding may play a role in HPS etiology, and further investigations may help to elucidate the mechanisms underlying the observed effect modification by age and parity.” The long and short of it? Researchers know that bottle feeding baby does increase the risk of HPS, but they’re not sure of exactly why that happens.

Dr. McAteer and his colleagues agree, saying, “Further studies are warranted to validate these findings and to look more closely at the speculative mechanisms, including possible hormonal effects, underlying the bottle feeding-HPS association.”

Do you think that formula-feeding baby is dangerous?