These goofs and gaffes will have you feeling like a more competent parent in no time. 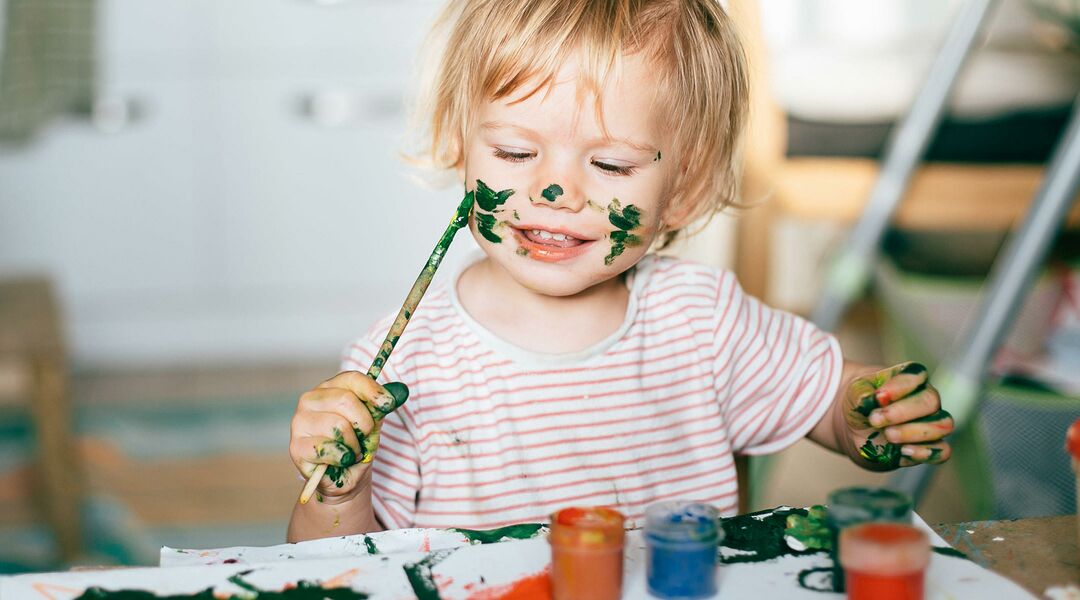 It used to be that celebrities were the only ones whose parenting fails go wide, for all the world to see. But now anyone can be in the spotlight for their transgressions. Forget to leave Tooth Fairy money for your kid, and it’s no longer your little secret—and parents don’t seem to mind one bit. After all, to err is human; to forgive yourself (and make people LOL), divine—especially if everyone comes out of it just fine. Here are our favorite funny parenting fails of the year so far.

How to Sleep In When You Have a Small Child

The struggle is real when it comes to being a mom and trying to get some sleep. That’s why Kristen Bell’s #momfail is so relatable. She told the Huffington Post that while sharing a hotel room with her family on a trip, her youngest daughter, Delta, 2, awoke hungry. “She woke up at like 6 in the morning, and me, my husband and our 4-year-old pretended to be asleep,” she confessed. “She was going, ‘Mommy, food!’ and I got up, took a Power Bar out of my purse, threw it in her crib and went back to bed. And I have no shame in that because I got 45 minutes extra sleep. You gotta do what you gotta do.” Celebrity parent fails—their just like ours!

What Happens When Mom Is an Absent Tooth Fairy

Busy parents mean high risk for parenting fails. Like most moms, Arien Masher is busy. Therefore, so is the Tooth Fairy. “When that darn tooth fairy forgets to come #ParentingFail #oops,” she captioned the picture of the note her little one wrote. Parenting fails aside, at least she raised a very understanding kid!

Little Jackson loves to sing, and he needed to get his hands on a mike. Fortunately for him (though not for Mom) he found the perfectly shaped item: a tampon!

This one-year-old was really hungry. So he foraged around the house and grabbed the closest thing that looked like a chicken cutlet: his mom’s bra insert.

Molly Sims, actress and author of Everyday Chic, says she now completely understands what her mom went through raising a stubborn daughter. As she told People, her mom always complained it was impossible to keep her dressed when she was growing up. And now her 2-year-old daughter Scarlett prefers to go au naturel too.“She answered the door…butt naked,” Sims said of her daughter. “I think it’s payback.” Apparently, parenting fails run in the family. 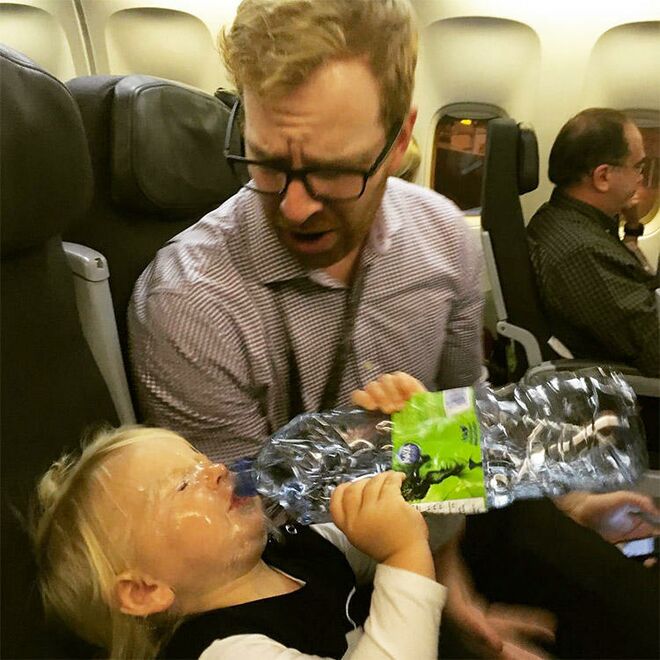 Flying With Kids Is Really Hard

Truth: Parenting fails happen when you assume kids are more grown-up than they actually are. While Kristin Day’s daughter toddler is already racking up the frequent-flier miles, she just needs a little more practice drinking out of her dad’s water bottle. Looks like it was a long (wet) flight to Budapest!

Why You Need to Remember to Lock the Door

Perhaps the most memorable of all the parenting fails this year: In this now-infamous interview with BBC, political science professor Robert Kelly was on live when his toddler sauntered into the room, joining him at his desk in full view of the camera. Somehow, Kelly remained poised as he attempted to gently push his kid offscreen before his second-born burst into the room, followed by Kelly’s panicked wife.

What Happens When You Don’t Check on a Quiet Kid

It’s one of the funniest parenting fails on wheels. Dad Jonathan Bingham was probably suspicious of the silence he enjoyed on a four-mile drive home from work with his son in the back. His instincts were right: Apparently, markers can indeed provide hours (okay, at least minutes) of fun—especially when the kid uses himself as the drawing pad.

How Being Mommy’s Little Helper May Go Too Far

Child labor is wrong—unless you need a little help getting something off the top shelf. Mom Kay Dissinger said it best when she posted on Instagram a video of her young daughter retrieving a pack of paper towels. “Whoever said having a kid doesn’t come in handy was obviously never in this predicament!!” she wrote in the caption.

Learning the Hard Way That This Kid Isn’t Camera-Shy

Patrick Ellis, a meteorologist in Jackson, Mississippi, calmly played along when a kid named Houston–whose dad appears on a call-in show that airs after Ellis’s news program—crashed his weather report. “There are farts everywhere and toots,” Houston predicts—until someone (presumably Houston’s father) carries him off screen.

This mom was stealthily breastfeeding while on live TV. That is, until her baby blew her cover near the end, as her tweet explains.

Okay, it was the middle name. But still. When you have four kids under the age of three, you’re bound to get a little frazzled from time to time, which is exactly what happened to Jackie Goldschneider. A stranger put her on the spot, and there was nothing she could do but fess up. Read the whole hysterical parenting fails story here. 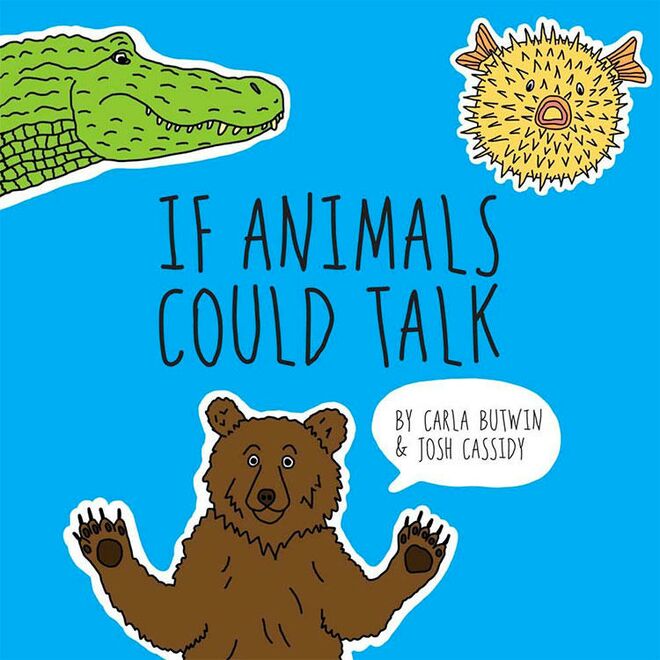 Never Judge a Book by its Cover

When this Dad went to read a bedtime story to daughter Emmersyn, he thought the book If Animals Could Talk (which his mother-in-law sent as a well-intentioned gift) would be perfect. He quickly realized it wasn’t. (The adult humor book is filled with curse words and jokes about cocaine and vaginas). Mom Tiffany took to Twitter to share her story: “I’m dying,” she wrote. “My mom bought this book for my 6-year-old and I just called to ask if she had actually opened the book. She hadn’t.” Even Grandmas are susceptible to parenting fails. 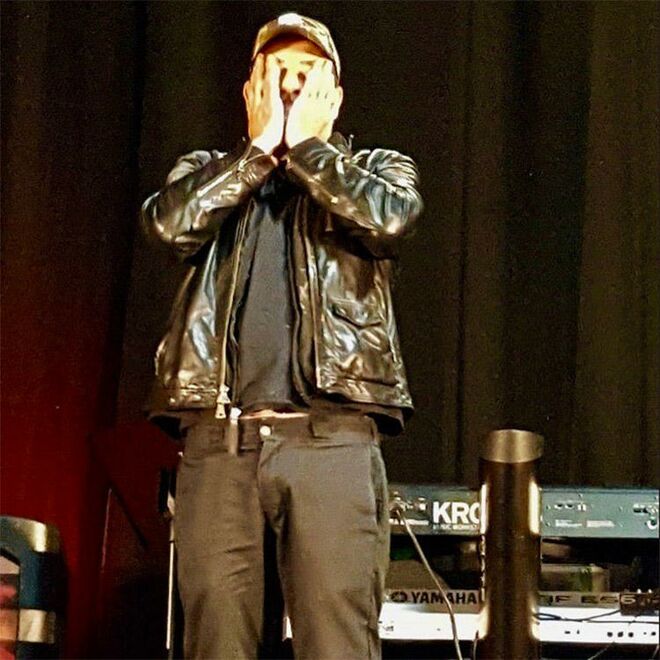 Yes, parenting fails can happen even before baby is born. The Walking Dead actor Jeffrey Dean Morgan made a big uh-oh when he accidentally revealed the gender of his unborn child with wife Hilarie Burton onstage at a Supernatural convention. “As usual, she was a rockstar,” Morgan said of Burton’s reaction to him spilling the beans, which he posted about on Instagram. “After all these years she’s come to expect me to be a dope… thank god she gets it, and loves me regardless.” 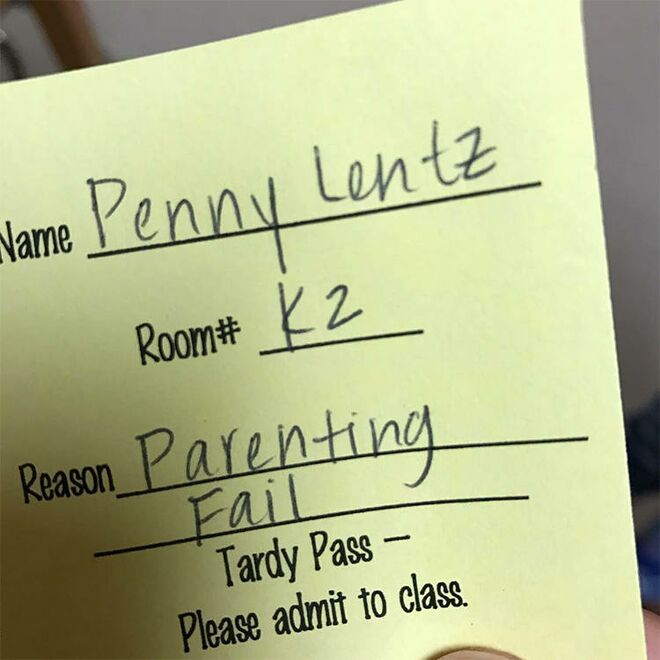 We wonder if this would work at the office?

When a Joke Goes Awry

Pittsburgh Pirates baseball player Trevor Williams thought it would be fun to teach his son a silly new game, tweeting, “I’ve been building up my son’s trust for two yrs with high-fives. Today I’m going to hit him with a ‘too slow.’ Welcome to the real world, son.” Of course, as with most things about parenthood, it didn’t go exactly as planned. According to Williams, his son was “unamused and went on to tell me, ‘You’re not my real dad.’” Ouch! Parenting fails can certainly be hard on the ego. 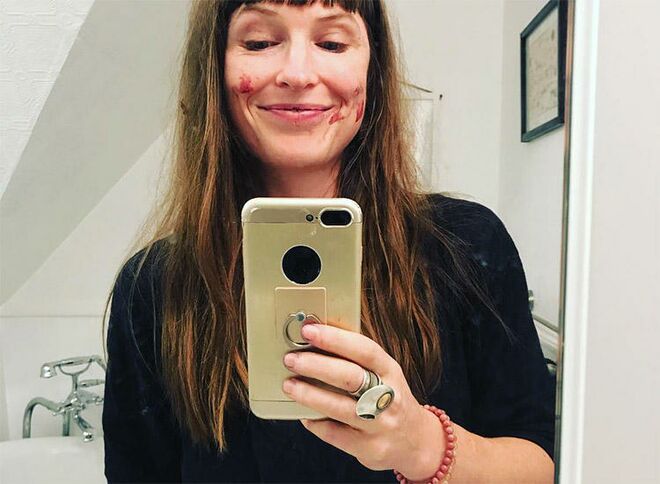 Why You Should Always Check the Mirror Before You Go Out

Mom Yolande Clark did a Costco run—only to realize when she got home that she had food on her face. As she explained on Instagram, “I was not actually aware that I had blueberry smeared all over my face and it is generally my intention not to look deranged when I leave the house.” The worst part, she adds: “I didn’t even have any kids with me to provide an unspoken explanation for the look.” Don’t worry Yolande, we’ve all been there when it comes to parenting fails like this one.

At Least He Had Good Intentions

This dad was just trying to help his son blow out his birthday candles. Only in this battle of dad versus the candles, the candles win, as he explains on Instagram.

First-time dad Jonathan Jui has some explaining to do when his wife gets home. Or checks Twitter, whichever comes first. As he tells it: “My son peed on my wife’s pillow under my watch,” he wrote, adding the anxious face emoji. Here’s hoping he also did some laundry before his “watch” ended.

There’s Been a Slight Miscommunication.

The poor Tooth Fairy just can’t catch a break when rogue parents are on duty. This time it was dad S.R. Schulz, who perhaps didn’t explain the whole “baby teeth in exchange for money” thing very well. According to Schulz’s tweet: “My son has misunderstood the Tooth Fairy story. He is planning on punching her when she arrives to pull his teeth out.” Here’s hoping they can clear things up before she shows up.