On the amazing journey to learning their l-sounds, r-sounds and language as a whole, toddlers can make a few, um, flubs along the way. We asked moms and dads to dish on the some of the funniest mispronuciations their toddlers have made. The result? Hilarious (and embarrassing!) outbursts you've got to read to believe. 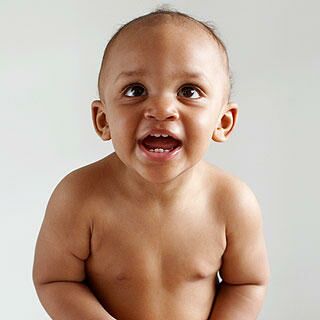 “My toddler said ‘f#$@’ for ‘fork.’ We went to dinner and we needed a new fork, so she started yelling it over and over again. I kept saying “That’s right… _F-O-R-K!” _and trying to yell it, too, so that people at the restaurant would hear me and understand what she was trying to say. It only made her yell her version of the word louder!” — Claire B.*

“Our daughter can’t say ‘bathing suit’. Every time she tries to say it, it comes out ‘baby soup’. She’s the only little girl I know that wants to wear ‘baby soup’ to the beach!” — Elana G.

“We were naming all the planets and when I asked my son to repeat ‘Uranus’ he says, ‘My anus!’ I almost died I was laughing so hard!” — Cole B.

“My middle child said ‘assoles’ for 'apple’s. He also couldn’t say ‘f’ words. Needless to say, there was a lot of cursing going on in our house.” — Tina K.

“My son would tell me, ‘Don’t pitch a sh*t,’ instead of ‘fit’. Also, he would call his favorite restaurant ‘Shat Boys’ instead of ‘Fat Boys.’ People must have thought I was raising such a vulgar boy!” — _Natalie G. _

“We really struggled with ‘s’ words in our house, so a ‘sucker’ was a ‘f**ker’. My husband would encourage baby to say it as often as possible — and it didn’t help that she repeated everything he said!” — _Heather H. _

“My son use to call elevators ‘alligators’ and for the longest time I didn’t understand why he wanted to ride an alligator! I thought he saw it on TV!” — _Jolie B. _

“I think my daughter overheard me telling my husband, ‘Quit being so complicated!’ because on several occasions she would try to tell me the same, except it came out, ‘Quit being so constipated, Mommy.’ It got awkward when we were in public, that’s for sure!” — _Nicole G. _

“We live on a farm and play with the animals all the time — so whenever my daughter wants to go see the chickens she asks to ‘Go see the chick-ass!’ It’s hilarious.” — _Reyna J. _

“This is so embarrassing, but we thought that our two-year-old was telling our server to shut up. It turns out he was just trying to ask for syrup. I felt so bad afterwards!” — Dara L.

“Our twin sons call the refrigerator the ‘fridge for later’ and it cracks me and my husband up!” — Johanna G.

“I feel like all kids say this at some point, but I remember our daughter saying ‘askadent’ instead of ‘accident’ whenever something would happen.” — _Hannah E. _

“My daughter said ‘crapafiller’ for ‘catapillar’ at daycare. I think our childcare provider almost died laughing. She couldn’t wait to tell me that story!” — _Jeanne S. _

How to Help Baby Learn to Speak?