How Olympian Moms Bounce Back After Baby

After baby’s born, it can be tough enough to get back in shape for the casual exerciser, but what about the moms who have the added pressure of competing in the 2012 Olympics? (We’d be screwed.) How did athletes get themselves back into tip-top shape after giving birth? We learned some of their secrets.
Save article
ByElena Donovan Mauer
UpdatedMar 2017 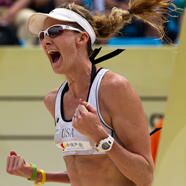 It’s probably the same determination they used to drive themselves to become elite athletes in the first place — Olympic moms want to excel and self-motivate to do it. Beach volleyball gold medalist Kerri Walsh is competing in her first Olympics since having two babies just a year apart and having gained about 36 pounds with each pregnancy (and she competes in a bathing suit!). “In my heart, I’m so far from done [competing in volleyball],” she told SI.com.

Similarly, Priscilla Lopes-Schliep, a Canadian hurdler who competed five months after giving birth and has her eyes on a medal, has said, “I’m a determined individual, and I knew I was coming back. [My agent and coach] were like, ‘Are you sure? You don’t want to retire?’ and I told them, ‘No way.’”

Next time you need motivation to get to the gym or squeeze in another workout, channel the drive and enthusiasm of an Olympic athlete. If it’s tough, maybe you’re doing the wrong exercises — try something new, that you’ll love just as much as they love their sport.

They stick it out for the long haul

“I read a pregnancy book [that said] it took you nine months to put this weight on or for your body to change,” says Summer Sanders, an Olympic gold medalist in swimming, who’s a mom of two. “It’s going to take you at least nine months to get back to you beforehand. And it’s never really you beforehand…. That’s freedom to give yourself a break.”

Sometimes it takes even longer. Track star Lashinda Demus failed to qualify for the 2008 Olympics just a year after giving birth to twin boys. She’s been quoted as saying she had “a horrible pregnancy,” had five months of bed rest and was depressed. But she still made a comeback, winning last year’s world title in the 400-meter hurdles, and is hopeful 2012 will be her Olympic year. “It’s a big difference from 2008,” she told ESPN.com. “My whole body is different. Now, this is my normal body. I’m in better shape than I was then; I’m running faster; my [sons] are bigger.” So sometimes it just takes more time than you think. Keep working at it.

They listen to their bodies

Aches and discomforts might be normal, but if you think your body’s saying, “I can’t take this,” it probably can’t. “I remember I tried to run — I think it was about five weeks postpartum — just a light jog, and my body said, ‘This is not a good idea,’” says Sanders. “So I stopped. I was thankful that I did.” She also says she had surgery for uncomfortable varicose veins after her second pregnancy.

Demus told FitnessMagazine.com, “Even though I still moved forward with my training, I paid special attention to any body signals that I might be pushing too much.” For Olympian moms, it would be more devastating to be injured than to make their comeback a little more slowly.

They make working out a priority

Sure, it’s their job to stay fit, but just like you, athlete moms wouldn’t have time for a workout if they didn’t hand their kids off to their partners, parents, babysitters, child care facilities or nannies. It may seem tough to leave your newborn for a couple of hours, but it will be really good for both of you to get a break.

Remember, exercise isn’t just good for your body, it’s good for your sanity too. “…The training after was more like an outlet [for] all these mixed emotions I had during pregnancy,” Demus has said. It will also give you some precious alone time, away from the hectic space your home will be.

They stay active even when they’re not training

When they don’t get to the gym, athletes don’t forget about their fitness. Olympic swimmer Janet Evans has said she tries to stay active around the house, doing sit-ups in her living room and chasing her kids around the backyard. Walsh told FitSugar she does squats while holding one of her sons and push-ups while one of them climbs on her back, adding, “You can really work up a sweat dancing around the living room with your kids.”

10 Minute Workouts to Do While Baby Naps

9 Must-Haves to Help You Care for Yourself, While You Take Care of Baby

Maren Morris Opens Up About the Hardships of C-Section Recovery

Ashley Graham Opens Up About “Feeling Like Herself” After Giving Birth

Ad About Postpartum Recovery Rejected by Oscars for “Being Graphic”